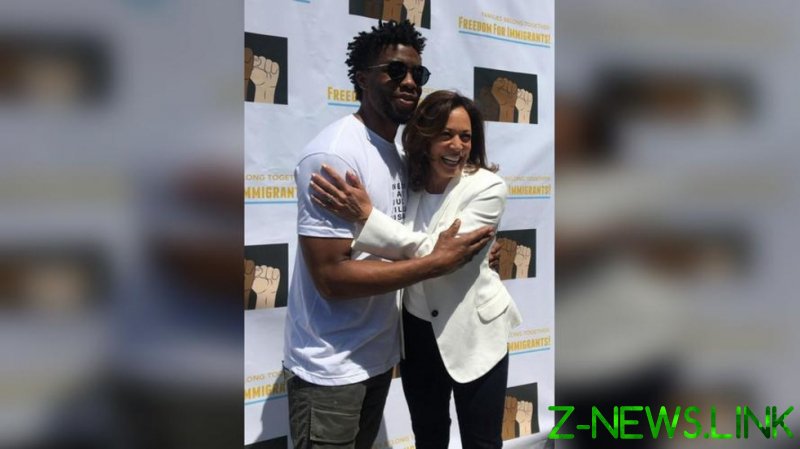 While most tweets reacting to Boseman’s death have focused on his interaction with fans, charity work, and acting career, which spanned from being a central part of the Marvel Cinematic Universe to playing historical figures like Jackie Robinson and James Brown, agenda-driven activists have essentially turned his passing into a campaign ad for Joe Biden and Kamala Harris’ presidential ticket.

The final tweet released from Boseman’s Twitter account before his passing was a picture of the actor with Sen. Harris (D-California), who is now the Democratic Party’s vice presidential nominee. The tweet was captioned with “YES” and the hashtags “Vote2020” and “WhenWeAllVote.”

Supporters of Biden’s ticket have spread the tweet like wildfire across social media and capitalized on the endorsement.

“The Black Panther’s last Tweet is a picture of himself with Democratic Vice Presidential candidate Kamala Harris, with the hashtag #WhenWeAllVote. Let’s take his words to heart & vote for a #BidenHarrisLandslide,” the anti-Trump account Truth Matters tweeted on Saturday.

While that user did not even wait 24 hours after the ‘Get on Up’ actor’s passing, others had swooped in much earlier.

“Chadwick Boseman knew he was dying (people with terminal cancer are not surprised when the end is near) and he CHOSE to make his last tweet about this election and Kamala Harris in particular,” activist Manjula Ray tweeted, adding it was not “immoral” to highlight Boseman’s politics so soon after his death.

Others similarly pointed out the tweet and pushed back against criticism.

“If you are using Chadwick Boseman‘s death right now, to push a political agenda to get people to vote for Joe Biden or Kamala Harris you are a s**t human being,” activist Ashley Stevens tweeted.

There has understandably been a flood of reactions to Boseman’s death – who fought colon cancer for years – and despite more political reactions not being inspired to change course by criticism, others have already had to reverse course in their coverage of the event.

Entertainment website Screen Rant quickly published a story in light of Boseman’s passing theorizing about what could happen to the ‘Black Panther’ franchise now that their lead actor is gone. After a wave of critiques calling the post inappropriate and ill-timed, the website pulled the story and issued an apology on Twitter.

It appears that speculating on the future of Boseman’s work has been deemed more offensive than blasting his image around as a prop to help in a presidential election.