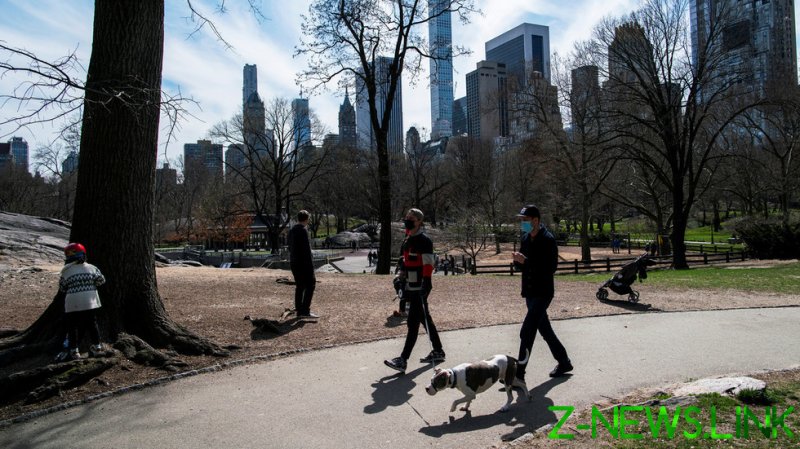 Filed in a Manhattan court on Wednesday by plaintiff Amy Cooper, the federal suit alleges the woman’s ex-employer – investment firm Franklin Templeton – discriminated against her on the basis of her race and gender when it fired her last year.

Disputing the company’s public statements, Cooper claims no “legitimate investigation” was ever carried out into the May 2020 incident, adding that such a probe would have been conducted if she were not a white person.

The woman went viral last year after she was filmed during an argument with an African American man who confronted her for walking her dog without a leash in New York’s Central Park. At one point in the encounter, Cooper called the police on the man and claimed he was “threatening [her] life,” despite no clear threat being made in the footage. She lost her job immediately afterward, had her dog temporarily confiscated and was even charged with filing a false report, though the case was later dropped.

Requesting damages for defamation, intentional infliction of emotional distress, negligence and racial discrimination, the lawsuit further alleges that Franklin Templeton helped to perpetuate Cooper’s image as a “privileged white female ‘Karen’” in its public statements, and that it portrayed her as a racist with “reckless disregard for the destruction of [her] life.” She insists she called the police for legitimate reasons and that it was not motivated by bigotry.

“Even a perfunctory investigation would have shown that [Cooper] did not shout at [the birdwatcher] or call the police from Central Park on May 25, 2020 because she was a racist – she did these things because she was alone in the park and frightened to death,” the suit says.

The lawsuit also characterizes the birdwatcher – identified as Christian Cooper (no relation to Amy) – as “overzealous,” claiming he was “engaged in Central Park’s ongoing feud between birdwatchers and dog owners” and had a history of harassing locals for walking their animals off-leash in violation of park rules.

It was Christian Cooper’s practice and intent to cause dog owners to be fearful for their safety and the safety of their dogs, and he had a history of doing so to people.

Months after Cooper became infamous as the ‘Central Park Karen,’ it emerged that the woman made a second call to police over the May encounter, telling officers that the birder “tried to assault” her. Yet, in the footage, it is Cooper who repeatedly approaches the man as he pleads with her to back off, making her first call to the police moments later.

However, the birdwatcher later refused to cooperate with a police investigation after Cooper was charged for filing a false report, telling the New York Times that “she’s already paid a steep price,” having lost her job and facing intense public scorn due to the viral video.