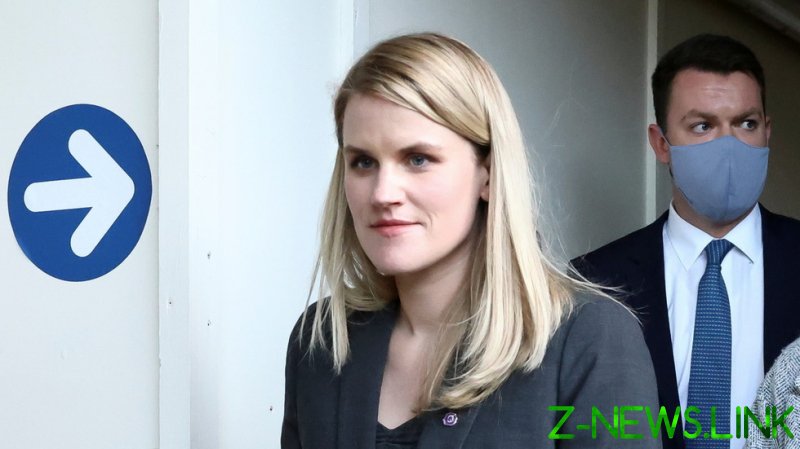 Haugen appeared before the UK’s parliament on Monday in a bid to convince lawmakers that Facebook needs more regulation. In her testimony to a committee working on a proposed Online Safety Bill, Haugen said that “horrific” riots and genocides will happen around the world if Facebook is allowed to continue spreading “polarizing” content – namely from the right wing.

Comparing Uncle Todd’s QAnon posting to the mass extinction of human life in Ethiopia or Myanmar may seem wacky, and on the surface resembles the moral panic of the 1980s, when the ‘Washington Wives’ thought listening to Judas Priest turned children into Satan-worshipping killers. But Haugen is not a lone Helen Lovejoy type demanding that “somebody think of the children.” She’s a billionaire-backed, media-supported censorship advocate who speaks for the worst enemies of free expression.

Her operation is a slick one. Haugen first grabbed attention by claiming that Facebook’s higher-ups know how harmful Instagram is to underage users (“somebody think of the children”), and within hours of going public had pivoted to pleading with Congress in Washington to exercise more control over political speech on Facebook “for the common good.”

In the days and hours before Haugen spoke in London, a slew of fresh articles appeared in sympathetic media outlets to bolster her case. Facebook, according to these articles, refused to listen to the demands of staff and remove right-wing news sources such as Breitbart and Charlie Kirk from its ‘News Tab.’ Furthermore, documents leaked by Haugen revealed that the company refused to take down contentious posts by right-wing figures, preferring instead to appear neutral, even if this meant allowing certain politically influential accounts to evade censorship.

Somehow, this is presented as a bad thing.

A steady stream of reports – all based on Haugen’s documents – hammered Facebook for allowing users to become “radicalized” by ‘QAnon’ conspiracy theories, blamed the pro-Trump Capitol Hill riot on the company’s apparently lax “extremism” enforcement and even on its failure to censor Trump himself back when he announced his campaign in 2015. Facebook staff, the documents state, wanted the censorship to kick in the moment then-candidate Trump rode down the escalator at Trump Tower.

The end goal here is obvious. Haugen wants challenges to the liberal status quo quashed online, be they from Uncle Todd or Donald Trump. She doesn’t want to break up Facebook, she said earlier this month. Instead she wants more “moderation” and less “misinformation.”

Her efforts thus far have focused on the US but, in her testimony on Monday, she made it clear that she wants global action. Hateful content, she argued, gets clicks worldwide, and Facebook’s own artificial intelligence and fact checkers are only equipped to tackle posts in American English. British English is “sufficiently different,” she claimed, that Facebook’s rules may be “under-enforced” in the UK. Moreover, she reiterated her claims that no matter in what country, Facebook’s boosting of content based on how many users interact with it creates an environment in which easily-clickable “anger and hate is the easiest way to grow on Facebook.”

Haugen is a censorship lobbyist on a world tour. After her appearance in Britain’s Parliament, she’s scheduled to meet with politicians in Brussels, Paris and Berlin, and to speak at an industry conference in Lisbon. And she’s playing to a friendly audience.

Haugen receives financial support from French-American billionaire Pierre Omidyar, who has previously bankrolled activist groups and NGOs in countries targeted for regime change by Washington, and whose organization, Luminate, actively seeks to work against the governments of Russia and China, and against “populist” leaders in the West.

During her time in Facebook’s Threat Intelligence unit, Haugen’s former colleagues included CIA, NSA, and Pentagon spooks. Details of this experience are nowhere to be found on her resumé, however, with her entire pre-whistleblowing web presence deleted before she went public and immediately earned a verified Twitter account. Nevertheless, her time in Facebook’s own intelligence agency gave Haugen the confidence to tell US Senators that China and Iran used Facebook to conduct “espionage,” and that she had “strong national security concerns about how Facebook operates today.”

Haugen’s fishy history and connections with the intelligence community have been examined in depth by RT and others already, and make for interesting reading. In short, with an army of Democratic and pro-censorship operatives working behind the scenes, Haugen has thus far excelled at telling lawmakers exactly what they want to hear.

Her “concerns” about national security were met with nods of approval from the more hawkish members of Congress, her condemnation of Facebook’s supposed mishandling of the Capitol Hill riot earned her praise from a Democrat-run commission set up to ‘investigate’ the pro-Trump fracas, and her demands for censorship pleased the Biden administration, which has made no secret of its desire to regulate online speech.

Whatever impact Haugen’s testimony has on British lawmakers will be apparent once the Online Harms Bill is rolled out. Prime Minister Boris Johnson has vowed to bring the bill to a vote “before Christmas,” spurred on by the shocking murder of Conservative MP Sir David Amess, whose killer may or may not have been radicalized online.

Should Parliament take Haugen’s testimony into account when the final version of the bill is voted on, they will have been swayed by a whistleblower like no other, one funded and coached by experienced spin doctors and feted by every organ of the establishment. It’s manufactured dissent, and pretty soon it’ll determine what you can and cannot say online.