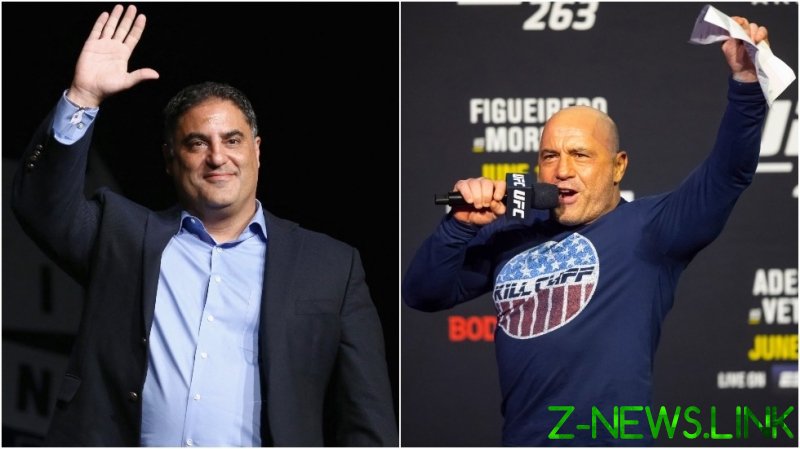 Uygur has often attacked Rogan for the libertarian views voiced on his Joe Rogan Experience podcast, which is currently the second-most-watched show on Spotify, only losing the top spot in late September. Those views include opposition to mandatory vaccination and concerns that the US government may use Covid-19 as a pretext to clamp down on people’s freedoms.

The controversial comment came during the Young Turks host’s usual online exchange of insults with Rogan’s fans, who were angered by his criticism of the podcaster, comedian and UFC commentator.

At one point, he wrote that he thought that “loser” Rogan, who himself prefers to stay away from feuds on the internet, was “a big boy who could handle himself. If he doesn’t like my free speech, he can grow a pair and defend himself.”

It prompted one of the commenters to bet $1,000 that Uygur wouldn’t have the guts to repeat that insult if he was face to face with the podcaster.

In his younger years, Rogan enjoyed a successful career in taekwondo, winning the lightweight US Open Championship, as well as several titles at state level. He also practiced karate and earned a black belt in Brazilian jiu-jitsu. Despite retiring from competition at 21 due to headaches and fears of serious injuries, he kept training and to this day puts a lot of effort into staying fit.

But those facts didn’t seem to perplex Uygur much as he swiftly agreed to the deal, claiming that it would be the “easiest $1,000 I ever made.”

“I’m much larger than Joe and I’ve fought my whole life. I’d end him,” the host insisted.

However, he expressed doubt that Rogan was actually going to physically assault him, as grownups don’t solve their differences this way.

The bold statement has sent Twitter into a frenzy as many users confessed it was a celebrity fight they would be happy to behold. Some called upon UFC boss Dana White to make it happen.

Rogan is 54 and reportedly 1.72 meters (5.6 feet) tall. Uygur is three years younger, a bit taller, and appears to have a weight advantage over his potential opponent. However, almost none of the commenters believed this was enough to compensate for the gap in skills between the two men.

Some users shared clips of Rogan’s fights and intense training routines, while pointing out to Uygur that he would end up being “embarrassed” if it got physical between the pair.

Even fans of the Young Turks program agreed that Uygur didn’t stand any chance against Rogan in the ring.

Many, of course, doubted Uygur’s willingness to actually trade jabs with Rogan, suggesting that the comments were just a “desperate attempt” to attract the attention of the popular podcaster.