Home / WORLD / Cenk Uygur calls out Joe Rogan – can the UFC pundit & world famous podcaster handle himself in a fight?

Cenk Uygur calls out Joe Rogan – can the UFC pundit & world famous podcaster handle himself in a fight? 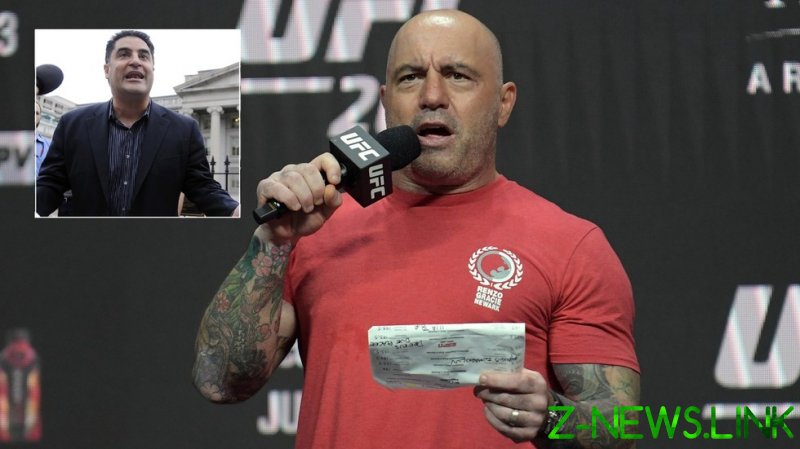 Uygur has been a frequent critic of Rogan, particularly throughout the Covid-19 pandemic where the Rogan has used his incredibly popular podcast to espouse a host of alternative views regarding the potential of mandatory vaccinations and governmental overreach.

Rogan also recently indicated that he was taken a battery of different medications to overcome his recent Covid diagnosis, including ivermectin – an anti-parasite medication which has prompted fits from progressives for it being heralded as a miracle cure by some sections of the American right.

Rogan has also speculated that Joe Biden ‘faked’ getting the Covid-19 vaccination on live television.

And it certainly seems as if these might have been the straw which broke Uygur’s back, after he suggested in a Twitter conversation with one of Rogan’s army of fans that he would “end” Rogan should they ever get into a physical confrontation.

“I’ll make a 1000 dollar donation to your trash network or your charity of choice to see you call Rogan who is not only the most successful podcast in history but also a black belt in mixed martial arts, a loser to his face,” claimed the fan online.

Uygur was only too happy to retaliate.

“You think he’s going to assault me? Sure, whatever. That’s incredibly dumb. But also wouldn’t work. I’m much larger than Joe and I’ve fought my whole life. I’d end him. But grownups don’t do that. I’ll send you the PO Box to send check to later.“

Now, let’s examine these claims. As Uygur states, he is indeed “bigger” than Rogan but his one inch height difference (5ft 7 1/2in versus 5ft 8 1/2in) likely wouldn’t be of much concern to the UFC analyst.

Rogan isn’t, as his fan claims, a “black belt in mixed martial arts” as no such classification system exists in the sport – but that’s not to say that he doesn’t have a legitimate and extensive history within combat sports.

He is a Brazilian Jiu Jitsu black belt under the tutelage of his friend (and equally contrarian podcaster) Eddie Bravo, who developed the infamous no-gi 10th Planet Jiu Jitsu system which was also adopted by top UFC lightweight contender Tony Ferguson.

But Rogan’s BJJ black belt is one of his more latter day accomplishments. His experience in the martial arts began at the age of 13 when he began studying Taekwondo and progressed to black belt level in just two years.

Before his 20th birthday, Rogan won the US Open Taekwondo Championship as a lightweight – and would go on to defeat the middleweight and heavyweight titleholders to achieve the rare Grand Championship honor.

Video footage even exists of Rogan teaching UFC legend Georges St-Pierre how to better perform a turning side kick – a technique perfected by Rogan after thousands of hours of martial arts training.

Rogan, 54, also boasts not insignificant kickboxing experience, as he has detailed one of his podcasts where he discusses his overall fighting credentials.

By contrast, Uygur’s claims that he would “end” Rogan don’t appear to be backed up by any of his own combat experience available online (although that’s not to say it doesn’t exist).

Rogan’s latter career is well-known. He moved into stand-up comedy and eventually earned a role in the sitcom ‘NewsRadio’ before transitioning to UFC commentary and developing his podcast empire.

But his public clash with Uygur isn’t the first time that Rogan has had beef with a public figure. More than a decade ago, talks were held for Rogan to fight Hollywood star Wesley Snipes in the UFC but the proposal fell apart when Snipes was imprisoned for tax evasion in 2010.

So while the 51-year-old Uygur talks a good game, Vegas oddsmakers would no doubt tilt any hypothetical fight between the two directly in Rogan’s favor – regardless of whatever Cenk Uygur might daydream about online.