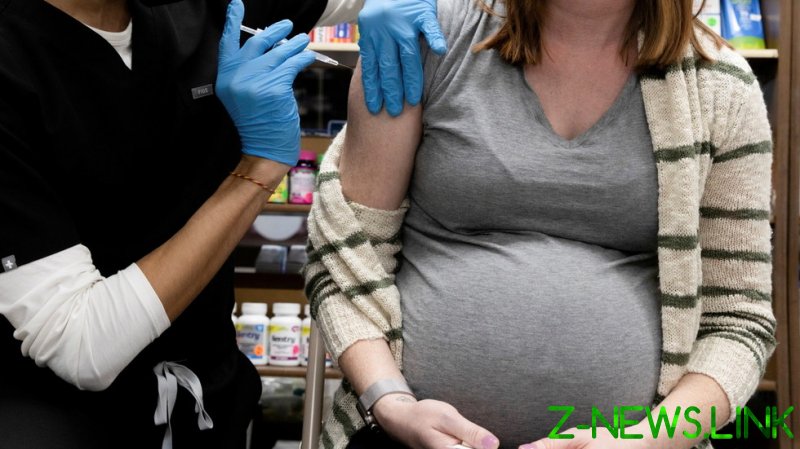 A Wednesday statement from the Centers for Disease Control and Prevention (CDC) “strongly” urged vaccinations for pregnant women – or in the agency’s gender-neutral phrasing, “people who are pregnant” – in order to prevent “adverse pregnancy outcomes” caused by Covid-19.

“Pregnancy can be both a special time and also a stressful time – and pregnancy during a pandemic is an added concern for families. I strongly encourage those who are pregnant or considering pregnancy to talk with their healthcare provider about the protective benefits of the Covid-19 vaccine to keep their babies and themselves safe,” said CDC head Rochelle Walensky.

A longer release from the agency also issued on Wednesday noted that August saw the “highest number of Covid-19-related deaths in pregnant people in a single month of the pandemic,” with 22 fatalities reported. Compared to “non-pregnant symptomatic people,” the risk of ICU admission and “intensive ventilation” for pregnant women is more than two-fold, the CDC said, while the risk of death is increased by 70%.

Beyond mortality for mothers, the CDC also warned of complications the virus could cause during pregnancy, including inducing labor prematurely and even stillbirth.

While the agency noted vaccinations among “pregnant people” had increased over time, it nonetheless said that just 31% were fully immunized before or during their pregnancy between mid-December 2020 and September 18 of this year, warning that, currently, “the majority of pregnant people remain unprotected against Covid-19.”

The CDC initially declared that Covid-19 jabs were safe for pregnant women in April, after a major study found no significant safety concerns. It reiterated that stance on August 11, days before the Food and Drug Administration (FDA) gave full approval to Pfizer’s formulation, which had previously been authorized on an emergency-use basis only. At the time, the CDC cited more recent data which did not show any “increased risk of miscarriage among nearly 2,500 pregnant women who received an mRNA Covid-19 vaccine before 20 weeks of pregnancy.”

Though the CDC’s longer statement on Wednesday did make a few passing references to “women” and “men,” the health agency has faced mockery in the past for what critics see as tortured attempts to avoid gendered language in its official releases – with its repeated use of “pregnant people” often cited as a prime example.

The CDC is not alone in its efforts to remain ‘inclusive’ and strip all gendered terms and pronouns from its vocabulary. Earlier this week, the head of the American Civil Liberties Union (ACLU) was forced to apologize after his org decided to edit an iconic quote from the late Supreme Court Justice Ruth Bader Ginsburg in a tweet, replacing female pronouns with neutral equivalents in a passage about abortion.

The very same day, the editor-in-chief of the British medical journal the Lancet, Richard Horton, offered an apology after the prestigious publication referred to women as “bodies with vaginas” in a pull-quote included on the cover of a recent issue. Horton explained that the journal “strives for maximum inclusivity of all people in its vision for advancing health,” and that the quote was intended to be “a compelling call to empower women, together with non-binary, trans, and intersex people who have experienced menstruation.”