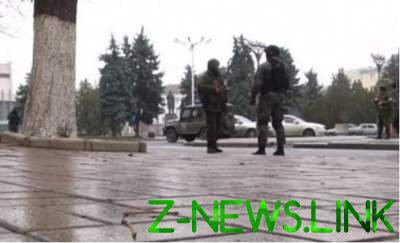 In the center of Lugansk after 12:00 the Pro-Russian mercenaries began to pull together military equipment.

The leader of the militants of the terrorist organization LNR Igor Carpenter had barricaded themselves in the building of the former Luhansk regional state administration. Sources LIGA.net misleading, which significantly strengthened the protection of this Kremlin puppet.

“Their (militants – ed.) became more, they’re all machines, without any markings, no white ribbons on the sleeves, no one is allowed and not allowed to take pictures,” said the source.

According to him, the building now drove armored personnel carriers and one is not allowed.

“Surkieva (curator of propaganda in the local media, the Director of the TV channel Lugansk 24 – ed.) also with Carpentry,” said the source.

“Military equipment at the center was more today after 12:00,” added another source.