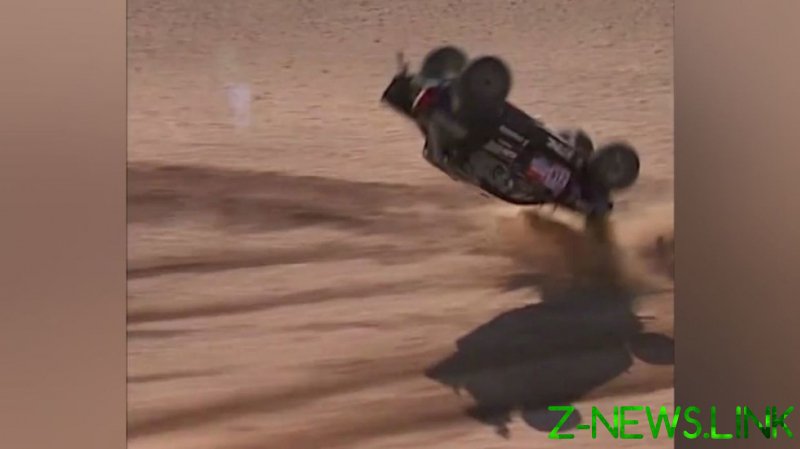 A pair of motorists were lucky to come out of a monster crash alive at the Dakar Rally.

Benediktas Vanagas and his accomplice Filipe Palmeiro were attempting to make progress during Stage 4 in the Saudi Arabian desert.

But flying up on a springboard, their vehicle flipped and made at least four somersaults.

Losing parts along the way and having its front bumper ripped off, the Toyota managed to land on its wheels with driver and navigator thankfully unharmed.

Originally, it was unknown as to whether the pair would be able to fix their vehicle and return for the fifth day of the grueling event set to conclude on January 14.

Yet when taking to Instagram later to share alternative angles of the crash, one of which was from onboard, Lithuanian driver Vanagas confirmed that this won’t be the case.

“Dakar is over. Most importantly, we are OK,” he wrote.

In an official clip, Palmeiro, who is Portuguese, is heard saying: “I don’t know what happened.”

“Everything looked normal and then we were thrown up into the air.”

The early exit is another disappointment for Vanagas in the Dakar Rally.

Before this, he finished 11th, 15th and 12th overall from 2019 to 2021. Yet these showings were far higher than his others before that since starting to participate in 2013.