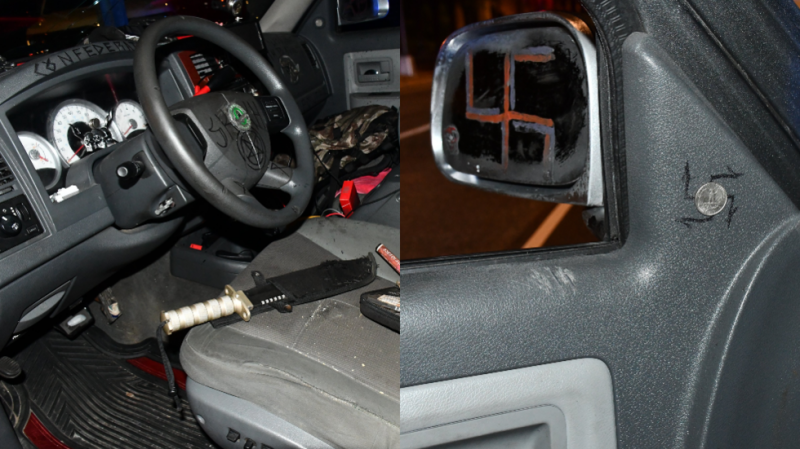 While on patrol late Sunday night, Capitol Police officers noticed a pickup truck emblazoned with swastikas and “other white supremacist symbols.” After pulling the truck over, officers saw that the driver was transporting a machete and a bayonet, both of which are illegal in Washington.

The driver, 44-year-old Donald Craighead of Oceanside, California was arrested for possession of prohibited weapons. Officers said that as he was being led away, Craighead told police that he was “on patrol,” and “began talking about white supremacist ideology and other rhetoric pertaining to white supremacy.”

The man was pulled over outside the Democratic National Committee headquarters, located two blocks south of the US Capitol. It is unknown whether he planned to attend any meetings or demonstrations in the area, or whether he has ties to any criminal cases in the area, the USCP noted.

The man arrested Sunday is the second suspicious pickup driver arrested near the Capitol in recent weeks. Back in August, a man parked up near the building and began live-streaming bomb threats via Facebook. He later surrendered to FBI agents, and has been charged with threatening to use a weapon of mass destruction. Though the man’s mental health is under evaluation, he could face life in prison if convicted.

“White supremacy” has been held up by politicians and liberal pundits as an imminent threat to the US, with President Biden describing the ideology as the “most lethal threat to the homeland today,” and Attorney General Merrick Garland describing “those who advocate for the superiority of the white race” as the top domestic security threat.