Home / WORLD / Capitol Hill violence was not a ‘victory’ for Putin: In reality, Russian fears consequences of ongoing US political instability

Capitol Hill violence was not a ‘victory’ for Putin: In reality, Russian fears consequences of ongoing US political instability 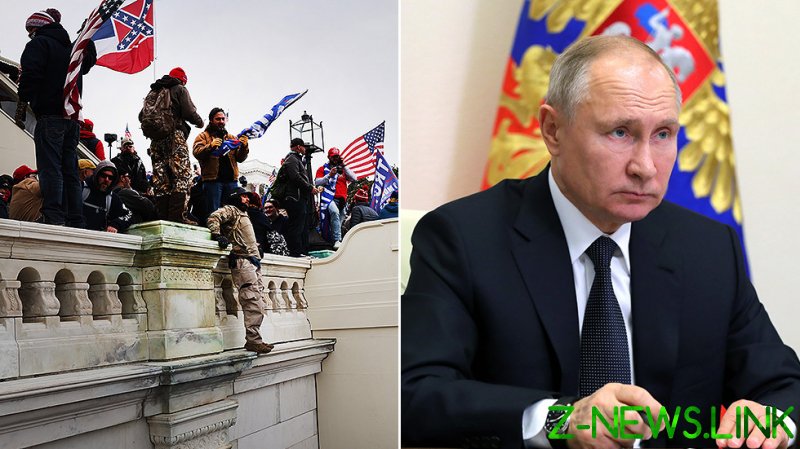 We constantly hear that ‘the Kremlin’ wants to destroy the international order, undermine democracy, and destabilize the West.

Add to this the obsession with Russia that has gripped a large part of the political left in America since 2016, and it was no surprise this week that a connection was found between Russia and the riot in Washington DC which led to the temporary occupation of the Capitol building.

The events in Washington were “the biggest gift to Putin” from Donald Trump, said Speaker of the House of Representatives Nancy Pelosi. “Today Trump delivered his latest, but hopefully his last gift to Putin,” echoed the former US ambassador to Moscow Michael McFaul. ”This is the day that Vladimir Putin has waited for since he had to leave East Germany as a young KGB officer at the end of the Cold War”, wrote former Deputy National Security Advisor Ben Rhodes.

Actors joined politicians to point out the link with Russia. “The only other person enjoying this chaos and anarchy as much as our defeated president is Vladimir Putin,” tweeted Mark Hamill, whose experience portraying Jedi warrior Luke Skywalker, apparently, gives him special insight into the inner mind of the Russian president.

Meanwhile, Tim Russ, best known as the Vulcan Tuvok in Star Wars Voyager, went even further. “How many Russian undercover operatives were in the Trump mob on Capitol Hill … Taking laptops and iPads with government secrets and info back to Moscow?” he asked on Twitter.

From the image of Vladimir Putin salivating with glee at the mayhem in Washington, it was just a small step to seeing him as the mastermind behind it. Israeli newspaper Haaretz made no secret of its opinion that a Russian hand was behind last week’s events. “Putin’s disinformation campaign claims stunning victory with Capitol Hill ‘coup’,” proclaimed the newspaper’s headline, adding that, “Russian information warfare ops have had one goal ever since the Cold War began: to sow chaos and undermine Americans’ sense of a shared reality.”

To support this claim, Haaretz cited Harvard Law School professor Yochai Benkler. “I’m not a Russia expert,” Benkler told the newspaper, rather amusingly undermining his own credibility on the issue, “but everything I’ve read from what I consider to be good work on Russian propaganda suggests that its primary role is to get us not to trust anything anymore.”

As if to back up Haaretz’s claim, video footage emerged of some of the rioters in Washington speaking Russian. ‘Of course, one of the members of the mob storming the Capitol building needed a Russian-English translator’, commented businessman Bill Browder, architect of the anti-Russian Magnitsky Act. The former Ukraine correspondent of US state-run media RFE/RL Christopher Miller identified the supposed Russians, tweeting that, “There are two women who appear to be Russian speakers and are on the arrest list as being from Oregon: Kristina Malimon, 28, and Yevge[n]ya Malimon, 54, both arrested for curfew violation and unlawful entry.”

Browder and Miller tweets created the impression that the Malimon duo were Russians. “Of course” Russians were involved, Browder seemed to be saying. But what he and Miller failed to tell their followers was that the Malimons are, in fact, from Moldova. The Russia connection turns out to be no connection at all.

This shouldn’t come as any surprise. As with so many stories about Russian efforts to undermine Western democracy, reality doesn’t live up to the hype.

Certainly, it is true that the chaos in Washington allows the Russian government and its supporters to undermine American claims that the United States is an exemplar of democracy which Russia should emulate. “The electoral system in the United States is archaic, it does not meet modern democratic standards”, Russian Foreign Ministry spokesperson Maria Zakharova has said. The USA “cannot now impose electoral standards on other countries and claim to be the world’s ‘beacon of democracy’”, remarked the head of the foreign affairs committee of the lower house of the Russian parliament, Leonid Slutsky.

Recent events do, then, play into the hands of those pushing Russia’s argument. Beyond that, though, it is hard to see why they would be a cause for celebration in the Kremlin. On the contrary, they are likely to be a matter of some concern.

In an article published by RT on Saturday, Fyodor Lukyanov, editor of the magazine Russia in Global Affairs, which regularly publishes articles by senior Kremlin officials such as Foreign Minister Sergey Lavrov, expressed the logic very clearly. American identity is tightly bound up with the idea of the country’s exceptional status. When something challenges this sense of exceptionalism, it creates a shock which leads American leaders to look for domestic and foreign scapegoats to blame for the country’s traumas.

“It’s not difficult to predict who will be enemy number one,” says Lukyanov. It will obviously be Russia. “America’s inevitable strife to reclaim its exceptionalism,” Lukyanov adds, will inevitably lead to “attempts to divide the world along the old democracy vs. autocracy lines,” and “we can’t rule out some aggressive ‘democracy promotion.’”

In short, political chaos in the United States, or anywhere else, is definitely not in Russia’s interests. This is well understood in foreign policy circles in Moscow. If one was looking for a single word to summarize the prevailing ideology there, a good choice would be ‘stability’. Rather than the American ‘life, liberty, and the pursuit of happiness,’ modern-day Russia has opted for something rather closer to the British Empire’s concept of ‘peace, order, and good government.’

This preference extends to foreign policy. The word ‘stability’ appears over 20 times in the 2016 Foreign Policy Concept of the Russian Federation. Vladimir Putin regularly portrays himself as defending the international order, and his complaints about the United States often center around accusations that the USA is causing international instability by launching wars, supporting rebellions, and inciting regime change and ‘color’ revolutions.

The idea that Russia is seeking to destabilize the world thus misrepresents Russian attitudes. The Russian outlook is rather conservative: it values order. For this reason, it is unlikely that Moscow is viewing the violence in Washington as a ‘victory’ or as a ‘gift’ from Donald Trump. More probably, it will be worrying about the fallout. Because, the more that Americans fight one another, the more likely it is that Russia will be caught in the crossfire.