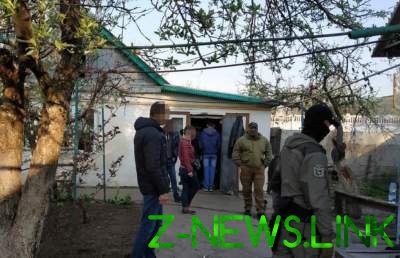 The gang almost a year held the man hostage.

A gang of criminals for a long time was kept 47-year-old man in the house near Kiev.

About it reports a press-service of the police.

This message was received from the victim to law enforcement. He said that from February 2018 to March of this year he was forcibly held in a rented house in the Kiev region. The man was threatened with a gun, beat and took the documents to the apartment. According to the applicant, they wanted to get his apartment, which he inherited. Also during this time, the man managed several times to escape but found the attackers.

Militiamen managed to establish the information about the kidnapping of the men. So, the victim was forced into a car and driven in unknown direction.

“During the authorized search in a private house, where he was held hostage, was discovered and seized mobile phones, two packages with substance of a phytogenesis of green color and a powdery substance of white color, documents, and tools to bodily injury: hammers, specially equipped with sticks, knives and live ammunition,” – said the head of the Podolsk police Department Vladyslav Ishchenko.

Militiamen proved participation of the couple to commit a crime. They were detained as article 208 Criminally-the procedural code of Ukraine. They were residents of the Kiev region, which were previously brought to criminal responsibility.

In the framework of criminal proceedings initiated under part 2 of article 146 (Illegal imprisonment or kidnapping) and part 4 St. 189 (extortion) of the Criminal code of Ukraine continue measures to establish all persons involved and their involvement in the Commission of similar crimes. To malefactors threatens till twelve years of imprisonment with confiscation of property.