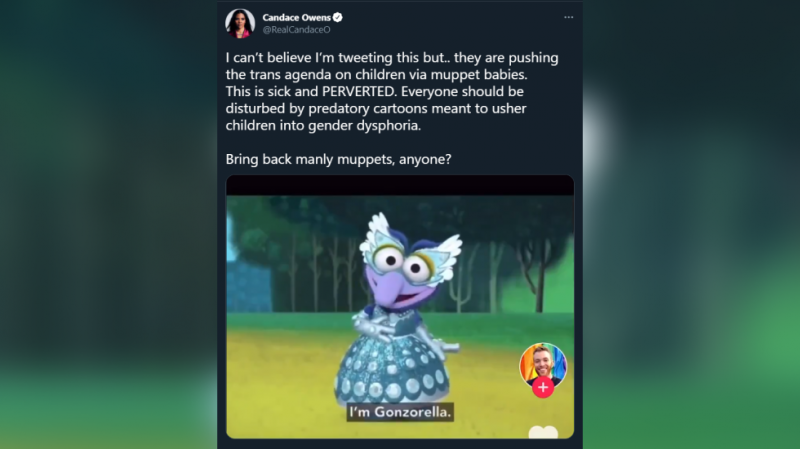 In late July, Disney Junior aired its latest episode of ‘Muppet Babies’, a spin-off cartoon featuring toddler versions of the characters in the well-loved ‘Muppet Show’.

However, this episode of the computer-animated series, aimed at children aged three to eight, contained a bit of twist, as eccentric and unpredictable character Gonzo wanted to wear a dress to the royal ball and later called himself “Gonzorella.”

In the episode, loosely based on the Cinderella story, Gonzo is told by Baby Piggy that the boys must go to the ball as knights, so the Fairy RatFather grants him a wish, turning him into a princess with a secret identity.

After the ball, Baby Piggy tells Gonzo that they met an amazing princess, but she ran away. At this point, Gonzo says he was the princess and puts on the dress to prove it.

He tells his fellow muppets that he didn’t want them to be upset with him, so he’d kept his cross-dressing penchant to himself. “Because you all expected me to look a certain way,” he responds when Baby Piggy questions why he’s kept it a secret.

However, cross-dressing in children’s cartoons has been deemed too extreme by some on social media, including outspoken commentator Owens who shared her anger in a tweet on Monday.

Labeling it as “sick and PERVERTED” she claimed, adding she couldn’t believe “they are pushing the trans agenda on children via muppet babies.”

“Everyone should be disturbed by predatory cartoons meant to usher children into gender dysphoria. Bring back manly muppets, anyone?” Owens added.

The conservative pundit was not alone, with many backing her comments on Twitter. “Let kids be kids,” said NFL player Nicholas Williams, warning people to “Be aware of what shows your kids are watching because these networks are trying to indoctrinate and pervert little children’s minds.”

Others were equally wary of the cartoon. “Yep [they] want to get them super young when their brains are in development,” one person tweeted.

Conservative author JD Rucker delivered another warning, telling people to make sure they keep an eye on the trans agenda despite everything else that is going on in the world. “Just because too many parents aren’t paying attention doesn’t mean our kids aren’t,” he wrote.

Several people said cartoons were wonderful when they were young and they didn’t understand why there was such a need to change them.

Owens’ viewpoint wasn’t held by everyone. Some people dismissed her comments, claiming that the character Gonzo had actually been wearing a dress since 1975 and that the episode in question had “nothing to do with gender dysmorphia.”

One person said that, as an adult, the muppets had been helping them find out who they were. “I love everything about Gonzo wanting to wear a dress,” one Twitter user wrote.

Some argued that the show is teaching children to respect and appreciate others regardless of what they look like, asking how that would be considered “horrible and perverted.”

Speaking to Disney fan club blog D23 before Owens’ remarks, executive producer Tom Warburton and co-producer Robyn Brown said they wanted to do a story where Gonzo wore a skirt and no one cared, but they decided to weave the Cinderella plot in there too. “It was just SO wonderfully Gonzo. We hope he inspires kids watching to be 347 percent of themselves in their own way, too,” Brown said.

Owens is no stranger to controversy. Shortly after her muppets tweet, the conservative commentator took aim at US women’s footballer Megan Rapinoe following the team’s loss to Canada at the Olympics. “Not heartbreaking at all. Rapinoe is an anti-American piece of trash who does not represent our country, anywhere, ever.”