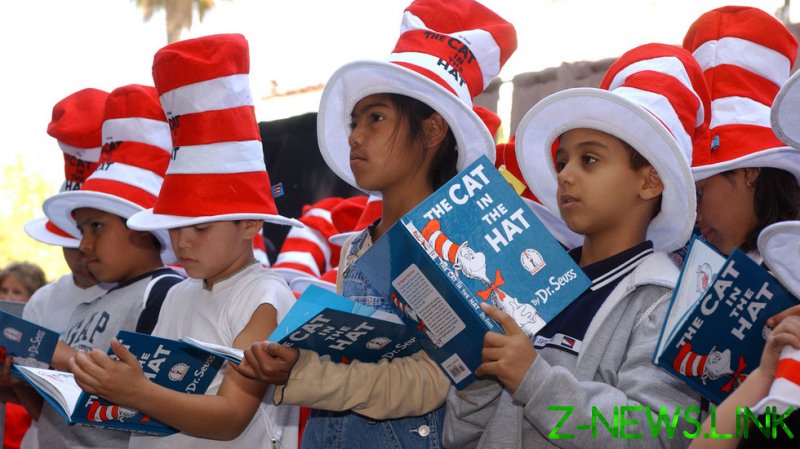 Delicious irony came knocking this week as the jackbooted diversity gestapo chose Book Week to raid the back catalogue of Dr Seuss, scrapping the further publication of half a dozen of his books over concerns about racist and insensitive imagery.

Nothing says ‘we support children’s literacy’ more than a good old-fashioned book-burning cheered on by the rabid supporters of cancel culture, which also happened to coincide with the late Dr Seuss’ birthday.

The problem with this latest assault on common sense is that taking away these six works – which are among the 650 million copies of his 60 books, translated into 17 languages and read by children in 95 countries – also takes away any chance of their being used to inform young readers about changing attitudes and beliefs over time is now consigned to the remainders bin.

So, to get this straight, in the name of increasing diversity in literature, we are decreasing the number of diverse books available. Dr Seuss would have enjoyed that, and maybe illustrated it with a furry orange snake eating its own tail. Because it’s total nonsense.

Maybe the illustrations in works, including And to Think That I Saw It on Mulberry Street and If I Ran the Zoo, are insensitive or even racist, but to hide them from the curious gaze of our children rather than discuss with them what they mean and why people might be offended is an act of cultural sabotage that does young readers no favours at all.

Hiding something does not make it go away.

This week’s book-ban has been a couple years in coming. The argument over Dr Seuss has been simmering on the backburner since 2019 following the release of a report by two academics entitled The Cat is Out of the Bag: Orientalism, Anti-Blackness, and White Supremacy in Dr. Seuss’s Children’s Books.

The title says it all, really. Its authors contend that the author of books like The Cat in the Hat, Green Eggs and Ham and One Fish, Two Fish, Red Fish Blue Fish, was actually intent on loading them with racist bile to poison young children against each other.

Incidentally, the Cat avoided the culture cartel’s hit list this time around, though it was mentioned in passing. Surely it missed the cut thanks to former first lady Michelle Obama choosing to read it to a group of black schoolchildren during a 2011 trip to South Africa before donating it to the community centre.

While the report’s authors make plenty of the Cat in the Hat wearing white gloves – apparently making him a trope of the minstrel – these dry-as-dirt American intellectuals fail to identify anything that might be considered funny in Dr Seuss’ work. Nope, his work is all about race.

They undertake a forensic and humourless analysis of children’s books through the prism of modern woke adult eyes employed by the cancel culturalists who fail to see anything amusing in the elaborate fantasy that drives schoolboy Marco’s outlandish claim that he witnessed an Indian Rajah on an elephant dragging a sled down Mulberry Street on his normally mundane journey home from school.

Instead they focus laser-like on the accompanying imagery to demand the book must be withdrawn from publication, never to be seen again, and Dr Seuss Enterprises, supposedly the guardians of his legacy, shamefully roll over. It’s made worse by the fact that the author – real name Theodor Seuss Geisel (1904-1991) – was left-wing and didn’t have “a racist bone” in his body, according to his stepdaughter, who added: “He was so acutely aware of the world around him and cared so much.”

If it really is about a problem with illustrations, then what about seriously visually impaired and blind readers of Dr Seuss? I guess they too will be denied the right to enjoy McElligot’s Pool, On Beyond Zebra, Scrambled Eggs Super! and The Cat’s Quizzer, although they are unlikely to be offended by imagery.

It is almost Seussian in its absurdity.

But in staring at the colourful line drawings, what the cancel culturalists miss completely is the trickery of the language employed, the hilarious word play, the unconventional thinking and the child-like images created in the reader’s mind that have made Dr Seuss so universally appealing.

Books are all about ideas. Children’s books are a celebration of the imagination and the journeys we can all take without leaving our seat. As the author declares in I Can Read with My Eyes Shut!, “The more that you read, the more things you will know. The more that you learn, the more places you’ll go.”

To deny our children the chance to take that journey is a cruel and egregious act of censorship and denial.

So now a batch of brilliant works by a true genius is cancelled and the world of literature is poorer for it. Shame on you liberal, self-appointed custodians of culture, this is a true disgrace.

“I am grateful to those who invested their hearts, souls, skills, and hard work to …