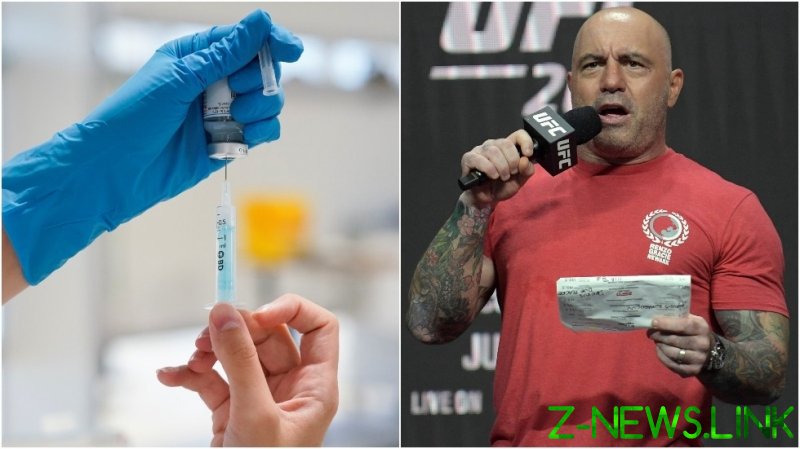 Rogan’s controversial statements have caused online frenzy on multiple occasions since he moved his super-popular podcast from YouTube to Spotify in a $100 million-plus exclusive deal last year to avoid censorship. The show instantly became one of the most viewed on the platform, with Spotify saying it was performing “above expectations.”

Back in April, the stand-up comedian and UFC commentator was trending on social media after suggesting young and healthy people didn’t need to get vaccinated against the coronavirus, and warning that giving into cancel culture could eventually lead to a situation in which “straight white men aren’t allowed to talk.”

He addressed the issue of vaccination once again in the latest episode of the Joe Rogan Experience podcast, saying that, by trying to inoculate as many people as possible, the US government might actually be making the virus stronger and more dangerous.

He based his claim on the findings of a peer-reviewed scientific paper published in the PLOS Biology magazine in 2015. Its authors said “anti-disease vaccines that do not prevent transmission can create conditions that promote the emergence of pathogen strains that cause more severe disease in unvaccinated hosts.”

Speaking about the so-called ‘breakthrough cases’ of inoculated people becoming infected with Covid-19, Rogan suggested that “the very sort of environment that we’re creating by having so many people vaccinated with a vaccine that doesn’t kill off the virus, it actually can lead to a more potent virus. Try finding that story anywhere.”

However, the US authorities insist that vaccination is the best way to stop the coronavirus pandemic, with President Biden’s chief medical adviser, Dr. Anthony Fauci, reiterating last week that those, who avoid getting the jab “are the ones that are propagating this outbreak.” According to Centers for Disease Control and Prevention (CDC) data, more than 70% of adult Americans have so far received at least one shot of the vaccine.

Rogan previously acknowledged he was “not a doctor” and his audience shouldn’t look to him as a reliable source of scientific information. He also claimed he was “not an anti-vaxx person.”

During the latest episode, the 53-year-old also said those pushing for mandatory vaccination to be introduced in the US, “are dumb. They don’t understand human history.”

According to the host, America became “the first experiment in self-government that actually worked, and it created the greatest superpower the world has ever known.” This success was achieved through “freedom,” he said, and ordering people to get a jab and carry vaccine passport would be going against the very principles the US had been built on. “You’re moving one step closer to dictatorship – that’s what the f*** is happening,” Rogan said.

Such comments didn’t go unnoticed by Twitter users, who were appalled at Rogan not supporting the government’s measures to contain the virus in the US, which is the world’s worst-affected country during the pandemic, having reported over 35.7 million cases and more than 616,000 deaths.

Many commenters were outraged, and demanded that Rogan be “canceled” once and for all. Others argued that, due to his influence on his audience, he should refrain from speaking on subjects of which he knows nothing.

The comedian’s knowledge of world and US history was also called into question, with Twitter users reminding him about the democratic systems of ancient Rome and Greece, as well as prior mandatory vaccination campaigns in America that hadn’t hampered the country’s development at all.

Some pinned the blame on Spotify and suggested the platform should be held accountable for allowing the spread of what they called “dangerous disinformation.”

There were many who supported Rogan, however. Hardcore fans of the podcast insisted that what he was saying was relevant and needed to be heard.

Spotify apparently has no intention to restrict Rogan’s self-expression, despite media reports that said some of its employees threatened to quit unless editorial oversight was deployed when it came to the airing of controversial shows such as his.

Speaking to the online news outlet Axios in late July, Spotify CEO Daniel Ek said, “Joe Rogan is just one out of eight million creators on the platform… We have a lot of really well-paid rappers… and, we don’t dictate what they’re putting in their songs either.”