Home / WORLD / ‘Cancel culture at work!’ Trump shares his surprise amid reports Cleveland Indians to drop their name after 105yrs

‘Cancel culture at work!’ Trump shares his surprise amid reports Cleveland Indians to drop their name after 105yrs 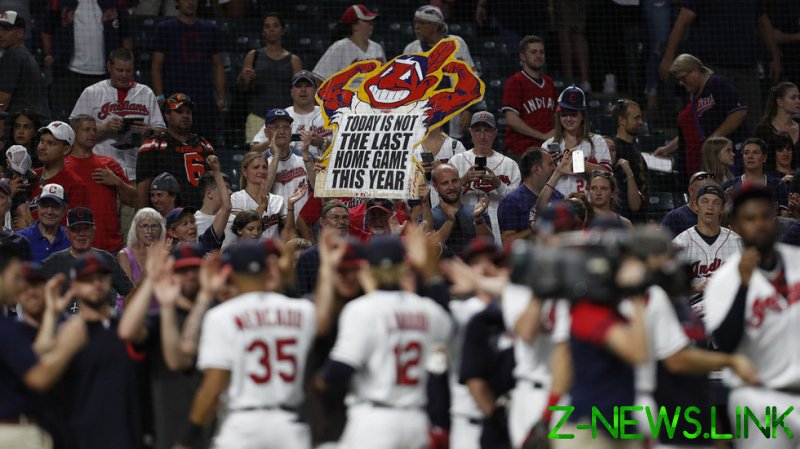 The Ohio-based Major League Baseball team will announce the decision to drop its current name as soon as this week, the New York Times and ESPN reported, citing sources.

Trump quickly tweeted that it was “not good news, even for ‘Indians,’” and was “cancel culture at work.”

According to reports, it was not clear whether the change will take effect immediately or sometime following the 2021 season.

It is not clear how the new name will be chosen either. ESPN said the team could go back to being called the Naps – as it had been before becoming the Indians in 1915 – or the Spiders, which was the name of a defunct 19th century team. Another option is reportedly ‘the Rocks’ or ‘the Rockers’, a reference to the Rock & Roll Hall of Fame in Cleveland.

The news comes as sports teams in the US and some places abroad are being pressured by activists, sponsors, and the media to ditch references considered by some as ethnic slurs for Native Americans. The campaigns were bolstered by the anti-racism and police brutality protests and riots that rocked the US throughout the year.

The team from Cleveland had already removed the iconic grinning Chief Wahoo logo from its players’ uniforms after the 2018 season, which was seen by activists as a racist caricature and “insensitive.” The team said in June it was having discussions to determine “the best path forward” with regard to the name change, and needed to “keep improving as an organization on issues of social justice.”

In July, the NFL’s Washington Redskins retired its logo and was renamed the Washington Football Team for the current season following threats from major sponsors.

The NHL’s Chicago Blackhawks, meanwhile, rejected calls to rebrand itself. “The Chicago Blackhawks name and logo symbolizes an important and historic person, Black Hawk of Illinois’ Sac & Fox Nation, whose leadership and life has inspired generations of Native Americans, veterans and the public,” the team said in statement in July.

Similarly, MLB’s Atlanta Braves, which draws its name from a term for Native American warriors, said in an email to ESPN in July that a possible change was “not under consideration or deemed necessary.”