Home / WORLD / Canadian village WIPED OUT by fire amid extreme heat as 90% of homes, incl. critical infrastructure, is gone

Canadian village WIPED OUT by fire amid extreme heat as 90% of homes, incl. critical infrastructure, is gone 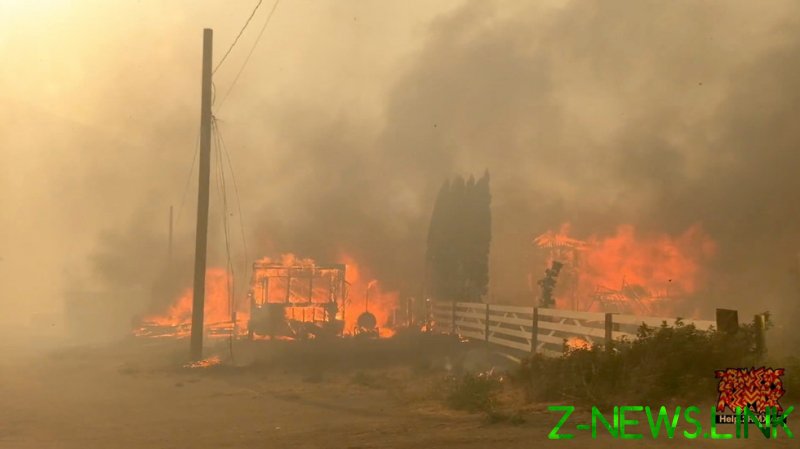 The fire reduced the small historic village of Lytton, located about 260km (162 miles) northeast of Vancouver, to little more than smoldering debris, officials said on Thursday, a day after around 1,000 people were told to evacuate.

“The fire has caused extensive damage to the town of #Lytton, BC and surrounding critical infrastructure,” Brad Vis, a member of parliament for Mission-Matsqui-Fraser Canyon, said on Facebook on Thursday. “The town has sustained structural damage and 90% of the village is burned, including the centre of town.”

There have been reports of injuries and missing people. Police said on Thursday that it was still unsafe to enter the area, noting that the police precinct was destroyed by the fire as well. No deaths from the fire have been reported so far.

Dramatic footage from the village shows flames ripping through the homes and other buildings, as people rushed to flee the city, braving the flames and near-impenetrable smoke.

The government of Canada has pledged assistance to rebuild. Prime Minister Justin Trudeau directed Minister of National Defense Harjit Sajjan and Minister of Public Safety and Emergency Preparedness Bill Blair to ensure federal resources will be provided to the province, which has reported a spike in sudden deaths linked to the heatwave.

At least 486 sudden deaths were reported across British Columbia within five days, a 195% surge in such cases. While investigations are still being carried out, authorities have blamed the increase in fatalities on the scorching heat. The heatwave has also plagued the US Northwest. It is believed to be behind the deaths of 63 people in Oregon since Friday.