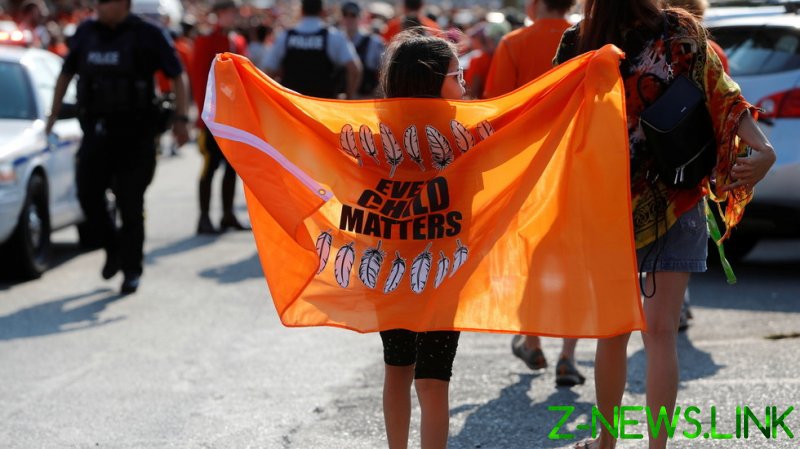 Ther Providence Catholic School Board has suspended the book-burning project – titled “Redonnons à la terre,” or “Give back to the earth,” and designed as a “gesture of openness and reconciliation” toward Canada’s indigenous population – after the practice was exposed by Radio Canada. Meanwhile, doubts have also been raised about the ethnic background of the controversial project’s main indigenous adviser. The adviser subsequently resigned from her position in the Indigenous peoples’ commission of Canadian PM Justin Trudeau’s Liberal Party.

As part of the project, which started in 2019, a total of 4,716 books from several dozen schools were removed from library shelves. About thirty were burned, and it’s unclear how many others were already “recycled” or set for destruction by other means as board members reportedly feared outcry from parents and teachers.

The ashes of the burned books were used as fertilizer for trees planted by students, Lyne Cossette, the spokesperson for the board, told the National Post on Tuesday.

The practice was carried out under the guidance of indigenous “knowledge-keepers,” such as Suzy Kies, the co-chair of the Liberal Party’s Indigenous peoples’ commission.

The indigenous advisers were deeply involved in the project, Cossette explained to the Post, noting that the board had “formed a committee” and consulted with “many aboriginal knowledge-keepers and elders” at various stages of the process – “from the conceptualization to the evaluation of the books, to the tree planting initiative.”

While defending the board’s methods, Cossette nonetheless acknowledged that some might have found the burning ritual disturbing. She lamented that school officials “did not intervene to ensure a more appropriate plan for the commemorative ceremony and that it was offensive to some members of the community.”

Kies, for her part, has justified casting books into the void for a variety of reasons, including an ‘offensive’ title alone. A 2011 book called “Cowboys and Indians” was dumped for its “atrocious” name. Other books, including comics, novels and encyclopedias, were deemed to be ‘Eurocentric,’ while some failed to differentiate between different aboriginal cultures. Childrens’ comic books like Asterix and the Indians and Tintin in America have also been discarded. Some works were trashed for perpetuating unflattering stereotypes for Native characters, who were portrayed as drunk or otherwise behaving badly, while others were tossed because indigenous people appeared shirtless in cover illustrations – considered a “false representation” of aboriginal culture.

A book might even fall into disfavor merely because the author does not hail from the same ethnic group that the book aims to describe. “Les Indiens,” published in 2000, was reportedly chucked because it had been written in France about Canadian aboriginals without any input from that community. And even when an author has aboriginal background, that does not ensure their books will escape the furnace, as Algonquin ethnologist and author Michel Noël’s book “Winter Indian” was disposed of for supposedly racist language and  “misinformation.”

The book-burning story took an unexpected twist on Wednesday, with Radio Canada reporting that Kies might have not had the aboriginal roots she claimed to have. While Kies claimed that one of her parents was of aboriginal origin and one of European origin, the outlet cited civil status records suggesting that her father was born in Luxembourg and her mother was French.

Dominique Ritchot, a genealogical researcher cited by Radio Canada, concluded the “knowledge keeper” had “no aboriginal ancestors for at least seven generations.”

The revelation might have saved some 200 books that were still “under evaluation” in the burning initiative, with Cossette telling Radio Canada that the whole “Give back to the earth” project was halted.

“We are deeply troubled and worried…. We were confident that Suzy Kies was of aboriginal descent. […] We had relied on her word,” Cossette said in an email.

Shortly after the report came out, Kies announced her resignation from the party commission. She dismissed any question over her indiginous heritage, however, insisting that the only reason for her departure was to protect Trudeau and the Liberal Party.

Even before doubts about Kies’ background crept in, political leaders, including Canadian PM Justin Trudeau and Conservative leader Erin O’Toole, condemned the Ontario school board’s biblio-pyromania, with Trudeau saying he “would never agree to the burning of books.”