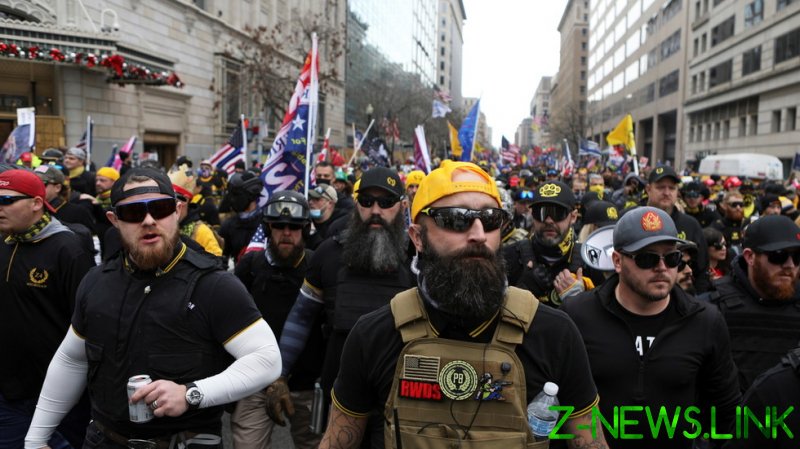 The House of Commons passed the measure without opposition on Monday, calling on Prime Minister Justin Trudeau’s Liberal government to “use all available tools to address the proliferation of white supremacists and hate groups starting with the immediately designating the Proud Boys as a terrorist entity.”

The motion was introduced by New Democratic Party (NDP) leader Jagmeet Singh, who celebrated its passage on Monday afternoon, though voiced a note of caution, stating that Trudeau “has a habit of breaking his promises” and can’t be trusted to “follow through” on the measure.

Singh moved to add the group to the “terrorist entities” blacklist almost immediately after the riot at the US Capitol on January 6, which saw a crowd of supporters of former president Donald Trump storm the building as Congress convened to certify Joe Biden’s election win. By January 7, the NDP chief launched a petition deeming the Proud Boys a “right-wing extremist group that promotes white supremacist views,” while stating that its members “joined a group armed with deadly weapons as they led an assault on the US Capitol.”

Meanwhile, the Canadian Anti-Hate Network – created to “monitor, research, and counter hate groups” – criticized the measure as too broad, saying that while some Proud Boys factions have “all the hallmarks of a terrorist organization,” it is nonetheless concerned about “definitions being loosened, power being misused, and eroding civil liberties or the criminalization of legitimate protest.” The network named “more threatening white supremacist” groups it said are more deserving of the ‘terrorism’ label.

David Hofmann, a professor of sociology at the University of New Brunswick, has also voiced skepticism in the designation. Last week, he told Public Radio International the move would have no “real strategic value,” predicting it would only scatter the Proud Boys into other groups and won’t “change the members’ ideas.”

Though the Proud Boys are an avowedly right-wing outfit that vocally supported Trump, the group’s current leader Enrique Tarrio – who identifies himself as “Afro-Cuban” – has repeatedly denied any connection to “white supremacy” and insists his organization is not a “hate group.”

Tarrio made headlines more recently after he was arrested in Washington, DC on property destruction charges, linked to a demonstration in December where he torched a Black Lives Matter banner belonging to a local church. The Proud Boys chairman has admitted to burning the sign, but claimed it wasn’t “about the color of someone’s skin,” but rather because “BLM is a Marxist movement… that has terrorized the citizens of [the United States].”