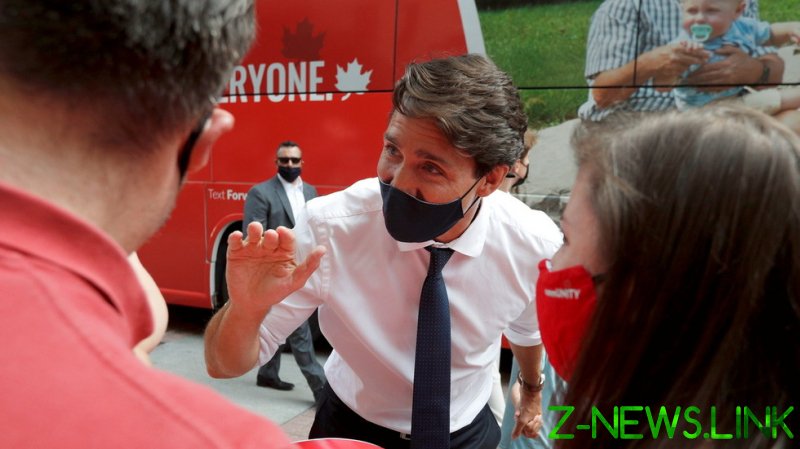 Trudeau visited Governor General Mary Simon at Ottawa’s Rideau Hall on Sunday morning, securing approval to call an election for September 20. The prime minister is betting that enough Canadians approve of his Covid-19 pandemic response and other policies to win back a majority in the House of Commons.

Canada’s next fixed election date was in October 2023 but, as prime minister, Trudeau had the power to call an election with formal approval from Simon, the personal representative of Queen Elizabeth.

The Liberal Party has such priorities as pumping an additional Can$100 billion ($80 billion) into Canada’s economy over the next three years to spur recovery from the pandemic but, as a minority government, it has to win support from opposition lawmakers to get legislation passed. Trudeau has accused opposition MPs of blocking crucial legislation for partisan purposes.

“We have seen a level of obstructionism and toxicity in the house that is of real concern,” the prime minister said in June.

Trudeau came to power in 2015 with a majority government, but the Liberals lost control of Parliament in 2019, after a scandal triggered by uncovered old photos that showed him wearing blackface. The Liberal Party currently holds 155 of the 338 seats in the House.

Speculation that an election will be called has been rampant for months, stoked by Trudeau’s increased traveling around the country. On a July visit to Calgary, where he announced new funding for public transit and rent subsidies, Trudeau was asked by a radio host whether the trip signaled that he was in “campaign mode.” He denied the theory, saying, “It shows that we’re getting things done.”

The Calgary event came on the heels of trips to Saskatchewan and Ontario, where Trudeau announced funding for steel jobs. The day after the Calgary visit, he landed in British Columbia, where he announced a Can$3.2 billion deal with the provincial government to cut childcare costs.

Jagmeet Singh, leader of Canada’s New Democratic Party, has called the idea of a snap election with the pandemic still raging “selfish.” “If Parliament is dysfunctional, then you yourself have played a leading role in that dysfunction,” Singh told Trudeau in a letter last week. “Telling Canadians that minority government can’t work is misleading and breeds cynicism in our democracy.”