Home / WORLD / Canada’s international image is a kind and gentle one. But internally, this Canada Day was a reminder of the nation’s dark history

Canada’s international image is a kind and gentle one. But internally, this Canada Day was a reminder of the nation’s dark history 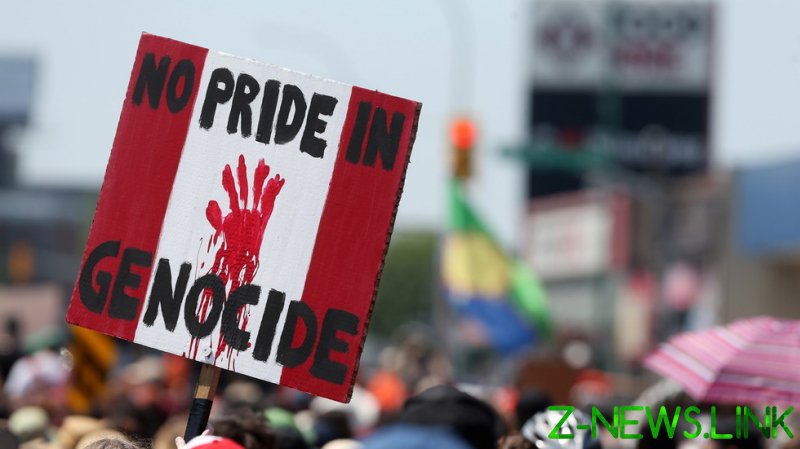 Yesterday was Canada Day, a celebration of Canada’s confederation, which occurred on that same date in 1867. Usually, the federal holiday is a day of celebration and festivities. But this year, after the harrowing discovery of hundreds of indigenous children’s unmarked graves, for many the day became a day of protest.

In an international context, Canada is often painted as a kind and gentle nation, especially when compared to its southern neighbor, the United States. After all, Canada did not have institutionalized slavery, Jim Crow, or redlining. However, that’s not to say the country doesn’t have its own moral failings, and the Canadian government’s relationship with indigenous peoples is indeed a tragic one, particularly with regard to the practice of residential schools.

Residential schools were an initiative by the Canadian government wherein indigenous children were forced to attend state-funded boarding schools, most of which were operated by the Catholic Church. The government’s goal for the children was compulsory assimilation into the majority culture, and reports that children would be beaten for speaking their native languages, rather than English or French, are common.

Over 150,000 indigenous children attended residential schools from the 1880s until 1996, with unknown numbers suffering physical and sexual abuse, and thousands more never returning to their families. In 2008, then-Prime Minister Stephen Harper issued a formal apology to former students of residential schools, approximately 80,000 of whom were still living at the time, stating: “The Government of Canada built an educational system in which very young children were often forcibly removed from their homes, often taken far from their communities. Many were inadequately fed, clothed and housed. All were deprived of the care and nurturing of their parents, grandparents and communities. First Nations, Inuit and Métis languages and cultural practices were prohibited in these schools. Tragically, some of these children died while attending residential schools and others never returned home. […]

The Government of Canada sincerely apologizes and asks the forgiveness of the Aboriginal peoples of this country for failing them so profoundly.”

Knowledge of the horror conducted in residential schools is not as common as one would imagine, even among Canadians, but in recent weeks, the travesties have been catapulted to national headlines with the discovery of unmarked graves across the country at sites of formerly operating schools. Over 800 bodies of children have been found in graves as shallow as three feet, but reports have yet to emerge on what could have killed these children, whether disease, malnourishment, or other factors.

Such a grim discovery would be difficult for any nation, but what has compounded the outrage is the reminder of just how recent these atrocities were. Chief Jason Louie of the Ktunaxa Nation went on record to state that he, like many other members of the indigenous community, had family members who were forced into residential schools, whose abusers were yet to be held to account.

Blame Canada (and the Catholic Church)

And so, in the midst of the nation’s attempt to reconcile with its not-too-distant past, this year’s Canada Day was unusually somber as Prime Minister Justin Trudeau declared that, in remembrance of the victims and their families, the Canadian flag would be at half-staff for the day.

But despite the government’s attempts to placate the increasingly indignant public, #CancelCanadaDay was trending on social media, and Canadians nationwide went out not to march in parades while wearing red and white, but to protest wearing orange in solidarity with First Nations peoples. Monuments to Canada’s history, and specifically its colonial heritage, were also targeted, with crowds in Winnipeg going as far to topple statues of Queen Elizabeth II and Queen Victoria.

And although crowds are calling for the identification and prosecution of government officials who facilitated residential schools, some of whom may still be alive, the state is not the only institution that was involved in the project. The Catholic Church infamously operated about 70% of residential schools, but unlike the Canadian government, the Pope has yet to issue a formal apology, though he is scheduled to meet with indigenous leaders in the coming weeks.

This lack of reconciliation is what is believed to be the motive behind a recent string of church arsons, both on and off reserves, though there is no conclusive evidence of such.

Although Canada’s national day was doubtlessly a boiling point, the recession of protests should not be mistaken as any sign of unity or healing. The divisions that have been exacerbated by this latest controversy highlight Canada’s political, racial, and even religious cleavages, which will take more than a typical Canadian “I’m sorry” to move past.