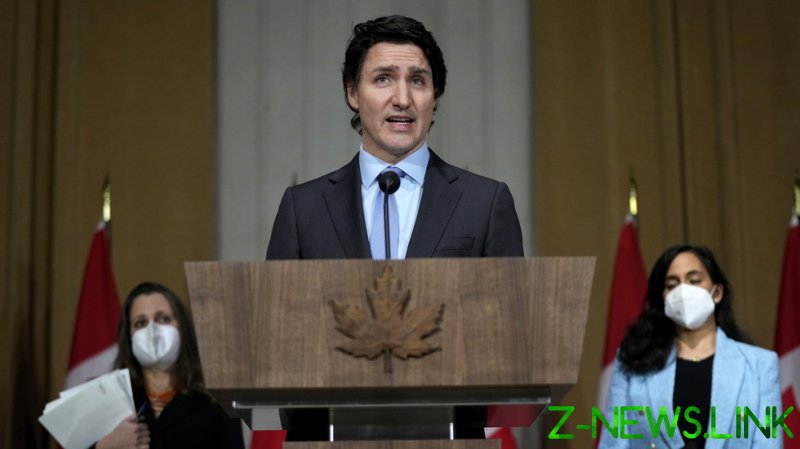 Canada is boosting its military presence at Russia’s border and sanctioning Russian sovereign debt, parliamentarians and companies,  Prime Minister Justin Trudeau announced on Tuesday, citing what he said was an “invasion” of Ukraine.

Up to 460 members of the Canadian Armed Forces will head to the Baltic country of Latvia, which shares a border with Russia, to join the 540 Canadian troops already stationed there.

A frigate of the Royal Canadian Navy is also headed to the area, accompanied by one or more CP-140 Aurora spy planes, Ottawa has announced.

Trudeau’s government has banned Canadians from buying Russian sovereign debt and having any financial dealings with Donetsk or Lugansk, which Ottawa sees as part of Ukraine. Canada has also blacklisted Russian parliamentarians who voted in favor of recognizing the two Donbass republics as independent, as well as Russian banks, military contractors and companies.

“Canada and our allies will defend democracy. We are taking these actions today to stand against authoritarianism,” Trudeau said. “The people of Ukraine, like all people, must be free to determine their own future.”

He is currently governing under the Emergency Act, which he invoked last week – for the first time in Canadian history – in order to crack down on a trucker protest against his Covid-19 mandates.

Ottawa’s sanctions and troop deployments are following the lead of Washington, which announced both measures earlier on Tuesday. US President Joe Biden has ordered around 800 US troops currently in Italy to reposition in the Baltic states, while sending eight F-35 jets from Germany to Eastern Europe and 32 Apache attack helicopters to Poland from their bases in Germany and Greece.

On Monday, Russian President Vladimir Putin recognized the two breakaway regions as independent states, citing Kiev’s purported refusal to implement the provisions of the Minsk agreements and accusing Ukraine of preferring violence to negotiating with them on autonomy.