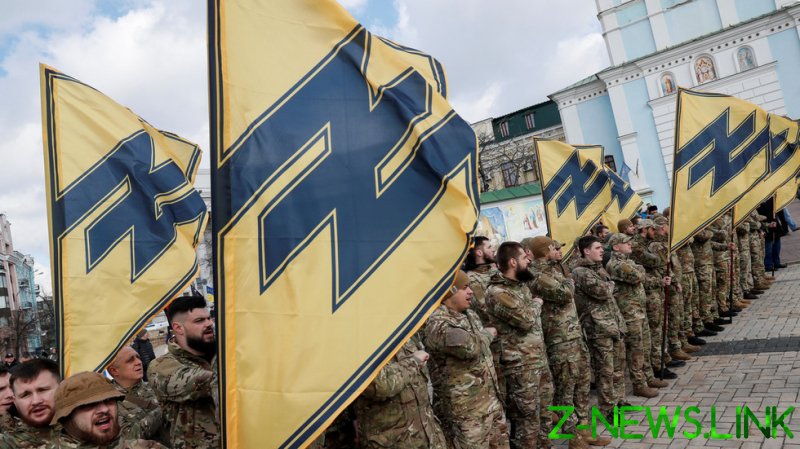 In response to the bombshell accusations, defense department spokesman Dan Le Bouthillier revealed that an internal review had begun last month that will “look holistically at all missions” where the Canadian Armed Forces (CAF) are involved with foreign military personnel.

However, he noted that some details would remain secret since “the specifics of the process by which the CAF verifies the suitability of training candidates is subject to operational security restrictions.”

Canada, which has been in Ukraine since 2015 as part of the joint task-force ‘Operation UNIFIER’, provides support and training to Ukrainian security forces. According to media reports, senior Canadian military leadership – including former defense minister Harjit Sajjan – have largely ignored warnings about far-right elements within the Ukrainian forces since then.

In June 2018, Canadian diplomats and armed forces officers met and posed for photographs with members of the neo-Nazi Azov Battalion – despite reportedly expressing concerns about the meeting being leaked to the media. The Azov Battalion then used the photo-op for propaganda purposes, according to an Ottawa Citizen report on Monday that cited newly released documents.

According to the paper, Lt. Col. Fraser Auld, then-commander of the task force, had warned that negative press coverage could prompt questions about the meeting from the Canadian government. In 2017, task force officers had apparently been briefed that “multiple members of Azov have described themselves as Nazis.” However, there was no condemnation from the top brass.

The paper revealed another previously unreported meeting in December 2018 attended by then-Canadian Army commander Lt. Gen. Jean-Marc Lanthier and members of the Azov Battalion. Again, there was no denouncement of its radical sympathies. Instead, Chris Henderson, the assistant deputy minister for public affairs at the time, reportedly emailed more than 20 defense department public relations officers about the “need to be ready” for media scrutiny.

In September, a study on the far-right in Ukraine’s military had first revealed that ‘Military Order Centuria,’ a neo-Nazi outfit of soldiers within the country’s National Army Academy linked to the Azov movement, had boasted online about receiving training from Canada and other NATO countries.

Le Bouthillier had previously noted that Canadian military officials had no prior knowledge of those who attended the 2018 meeting, which was apparently organized by Ukrainian authorities. He added that Canada “has not, does not, and will not be providing support to Azov and affiliated entities.”

Despite the announced review, critics told the paper that the CAF does not directly conduct vetting of the foreign troops it trains, leaving the responsibility to the nation providing the troops instead.