Home / WORLD / Can we kick out immigrants like Denmark does? Critics snicker after AOC lauds McDonald’s workers’ wages in European nation 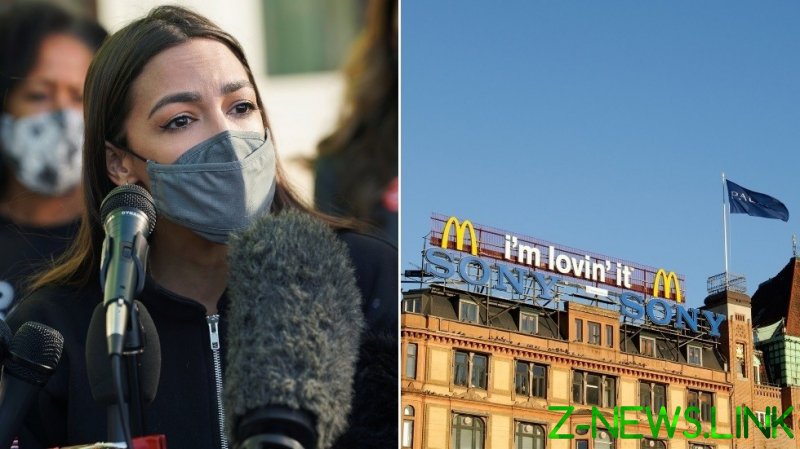 The fact that paying workers a living wage is even up for debate is “embarrassing,” progressive lawmaker Alexandria Ocasio-Cortez (AOC) tweeted on Tuesday as she called to override the Senate parliamentarian and push forward with the $15/hour minimum wage. The official ruled last Thursday that the proposal cannot be included in President Biden’s $1.9 trillion Covid-19 stimulus bill. The White House conceded, angering many people on the left.

The argument about well-compensated McDonald’s workers in the European nation has been around for years and has been regularly used by progressive politicians in the US. The Danish branch of the international company prides itself on being among the best employers in the country.

Ironically, Denmark has no government-mandated minimum wage. The substantial pay rates and privileges enjoyed by working-class folks employed by McDonald’s there are a result of collective bargaining on their behalf by a union. One could argue that this solution is inapplicable for US union-busting realities.

But direct wage comparisons are somewhat tricky considering the vastly different approaches to taxation and public services in the US and in Denmark — and obviously things like prices and unemployment rates should be factored in to tell how much the lot of European burger-servers and cashiers is better compared to their American counterparts.

A battle over such intricacies and whether they were relevant to force a vote on minimum wage in the Congress raged in AOC’s comments, pushing Denmark’s name to trend on Twitter. Some of her critics found a different line of attack, however. If the New York City representative is such a fan of Danish policies, wouldn’t she endorse those on immigration, they pointed out.

This week Denmark became the first European country to strip residency permits from dozens of Syrian refugees and tell them to go back to their home country. The government argued it was safe to return to a government-controlled area surrounding Damascus.

The ruling Social Democratic Party has an anti-immigration stance and Prime Minister Mette Frederiksen even pledged to work toward having “zero” applications for asylum in the country during a parliament session in January.