Home / WORLD / Can America be saved? It would have to start with some TRUTH-TELLING and unselfishness, so…not so much

Can America be saved? It would have to start with some TRUTH-TELLING and unselfishness, so…not so much 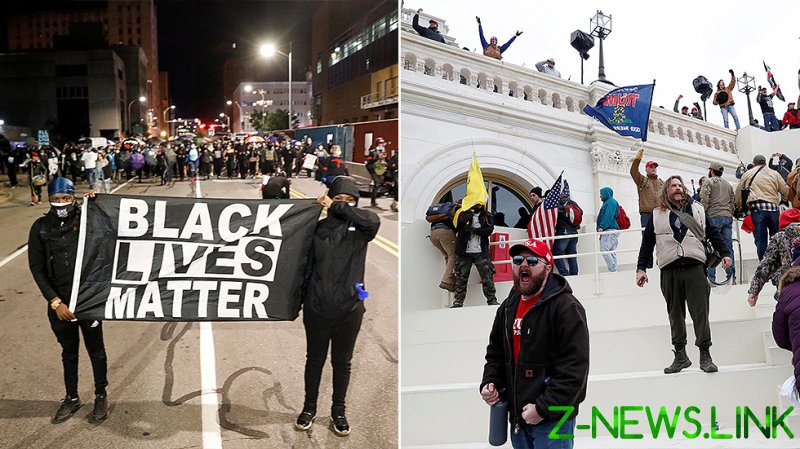 Ironically, it was during the last civil war when President Abraham Lincoln spoke those eloquent words at Gettysburg, asserting that the honored dead had fallen in battle so America could have a “new birth of freedom” and govern with such dedication to the will of its people that it “shall not perish from the earth.”

There are no Abraham Lincolns today. There are no statesmen. There is no one who sees any kind of picture bigger than a selfie. And eloquence? The new figurehead can’t even tell his lies in coherent sentences or keep his hands to himself.

There are selfish grifters who govern entirely on a me-first-me-last basis, seeing only their agendas and opportunities to seize more power. There are billionaires and foreign or otherwise special interests that buy and sell the egomaniacal hucksters. There are basement dwellers who burn, loot and brutalize to fight for disingenuous, racist causes. There are people in horned hats or tactical gear who break into the Capitol to sit at Nancy Pelosi’s desk or take souvenirs.

At this moment of crisis, we get the usual crass opportunism. President-elect Joe Biden – the guy who vowed to heal and unify – essentially blames the failure of police to defend the Capitol on racism. These are the same police who have protected him for nearly five decades. But Biden and other Democrats can’t resist the chance to falsely slash at and exploit America’s Achilles heel, the race weapon.

Mainstream media outlets suddenly learn how to use words such as “riot” and “domestic terrorism,” and discover that violent protests aren’t noble. They forget the talking points of last summer, when Black Lives Matter and Antifa rioters torched America’s cities on false pretenses. They even help lead the effort to hunt down the perpetrators and destroy their lives. They and their social media partners work in unison to further silence non-conforming voices and brand them as dangerous villains.

No longer do the propagandists quote Martin Luther King, saying that “a riot is the language of the unheard.”That’s because this time, the quote applies accurately. People fed up with being betrayed, lied to and falsely demonized have such little remaining hope in the system that pushing through a line of police at the Capitol can seem like a good idea.

Many of these unheard manifested previously as the Tea Party, which sprung up in 2009 to fight overreaching government, deficit spending and open borders. The response was predictable: lies. Brand the movement as being about, what else? Racism. Falsely accuse, then say it over and over and over again until the zombie armies believe it.

Never, ever, ever listen to – let alone heed – the demands of the people. Keep the fake wars going. Keep the boot of illegal immigration on the throats of wage earners. Keep the government growing. Keep globalist interests on the front burner. If necessary, distract with some fake issues, like transgender restrooms and Koran burning.

Deflected, belittled and falsified, the people were so unheard by 2016 that they elected a reality show star. Most weren’t foolish enough to think that he was a righteous man, but they saw him punch back at the so-called elites and stand up to manipulators in the media. More than anything, they were convinced that, unlike the Democrat and Republican rulers and media mouthpieces, Donald Trump didn’t hate them. In fact, he showed love for them and vowed to govern in America in the best interests of its citizens.

The usual tactics were deployed – have we mentioned skin color? – but the people were so excited at the prospect of having a president who’s at least a little bit on their side that they revolted. No media-pollster CONfidence game could keep them away from voting to Make America Great Again.

They stood by Trump through the ups and downs and self-inflicted wounds of his presidency. Wave after wave of largely deceptive attacks failed to move them. Being called bigots, Russian agents and cultists didn’t scare them away. And when Trump alleged that his re-election was stolen through massive fraud, they rallied to “stop the steal.”

With those allegations dismissed by the courts mostly on procedural grounds – and any evidence supporting them quashed by the media and Big Tech without being seriously investigated – the people are so angry and unheard in 2021 that we have a powder keg.

The only way to diffuse it would be to start telling some truths and have a real reckoning with disenfranchised, working-class Americans. Auditing the election would be a good starting point.

Biden himself should call for it. Tens of millions of people believe the result to be fraudulent. That alone is a crisis big enough to merit a real and independent investigation. If the allegations are as baseless and absurd as the media says, Biden has nothing to lose. He can build credibility and restore confidence in the nation’s political system by taking the magnanimous route and demanding a true accounting of the votes.

That’s not where we’re going. As in a Banana Republic, the ruling party is now seeking to prosecute its defeated political enemy while dehumanizing and destroying his supporters. With nine days left until Biden takes office, the corporatist-globalist establishment will race to impeach Trump again, and surely, he will need to be prosecuted for other alleged crimes after leaving office.

His supporters also must be ruined to never rise again. The sins of individual wrongdoers will be overstated, such as when incoming Senate Majority Leader Chuck Schumer likens the Capitol breach to Japan’s 1941 attack on Pearl Harbor. Those sins also will be applied to the whole populist-constitutionalist movement. The phrase “mostly peaceful” is forgotten. Corporations and governments are in the process of a witch hunt to fire those who are found to have participated in the protests, including those who merely demonstrated legally. Cancel mobs will seek to out them and destroy their lives.

The absurd Pearl Harbor comparison illustrates the ruling class’ visceral hatred of flyover-country Americans. Former CIA intern Anderson Cooper, the Vanderbilt heir and CNN host, revealed that hatred further, looking at footage of the protesters and saying with disgust that they will “go back to the Olive Garden and to the Holiday Inn” and discuss “the great day they had in Washington.”

This doesn’t end well. Deflecting and defaming people rather than honestly confronting their legitimate grievances has gotten America to this untenable point. The revolt has already escalated from the Tea Party uprising to electing Trump to violent protest.

Do the Bidens, Schumers and Coopers of the world – and their backers in finance, Big Tech and arms manufacturing – really think that tens of millions of freedom-demanding Americans are going to curl up and obey because they’re being called names again? How’s that working out so far?

What comes next will be far uglier. America as we know it is over if it remains on this track. The present predicament hearkens back to another Lincoln speech, in which he used a line from the Bible to make his point: “A house divided against itself cannot stand.”