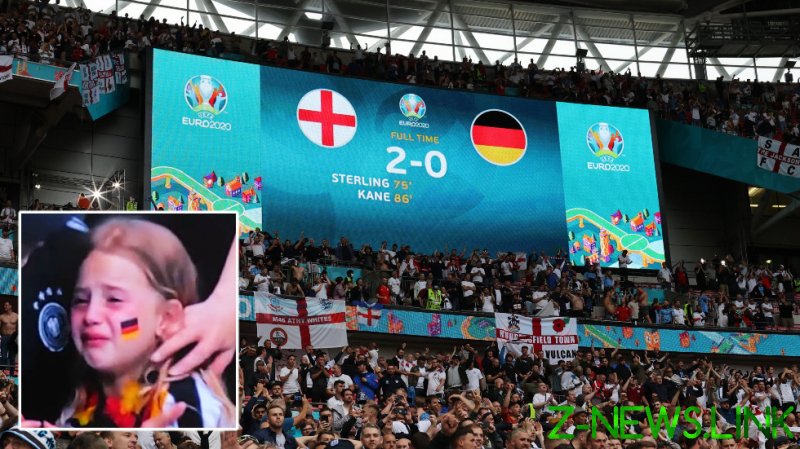 The young Germany fan, who wore her team’s shirt and nation’s facepaints for the game at Wembley, was jeered and cheered as her tearful face loomed on TV screens across the UK while she was comforted as the shock of watching her side’s round of 16 defeat sunk in.

After the footage appeared to initially draw a mix of good-natured jibes and mild concern from viewers who felt the scene should not have been shown, a measure of inevitable extremism followed on social media.

Social justice warrior and former Liverpool and England striker Stan Collymore was the highest profile figure to highlight vitriolic abuse towards the fan on Twitter, including crude insults and references to military conflicts between England and Germany.

Aiming to help the girl’s parents give her a “nice treat”, the crowdfunding page, which was launched by a web designer from Wales, was well on the way to quadrupling its original target of around $700 within hours.

“England beat Germany in a major competition at last – well done,” he said. “However, an unsavorable element of social media piled in on this photo of an upset little girl, as seen by Stan Collymore.

“Pretty horrible, to put it mildly. Yes, there are more people affected by this than just this little girl – but hey, this is just meant to be a token of goodwill. Yes, there are other potential good causes – but I’ve picked this.

“No, I don’t think this will change the world. But it can do one thing for that little girl. Weʼre raising [the money] to show this little German supporter that not everyone in the UK is horrible.”

Donors claimed they had been “heartbroken” by the incident, but not everyone was entirely behind the venture after the initiator publicly begged heavily-followed German journalist Raphael Honigstein to help find the girl’s parents.

“My son cried when Man United lost to Villarreal in the Europa League final,” replied one cynic. “Can I DM you my bank details?”

Another asked: “How do you know she’s crying about the football? My daughter cried like that when she dropped her ice cream last year.”

One detractor warned that the move could add to a worrying trend. “This action is exactly why kids these days can’t cope with things,” they said.

“They’re being made to cry wolf whenever they feel anything slightly negative.”

Germany were holding their own against the Three Lions until a dismal final 15 minutes in the game in front of 45,000 people in London, most of whom were England fans desperate for a first knockout stage win against their age-old rivals since the 1966 World Cup final.

Raheem Sterling scored the first goal, then the normally-deadly Thomas Muller missed a huge one-on-one chance before Harry Kane added the second three minutes from the end of normal time.

Watching the clip on YouTube, a supporter said: “I mean, you’re not going to cheer if your team has just lost a match – especially in the Euro.”