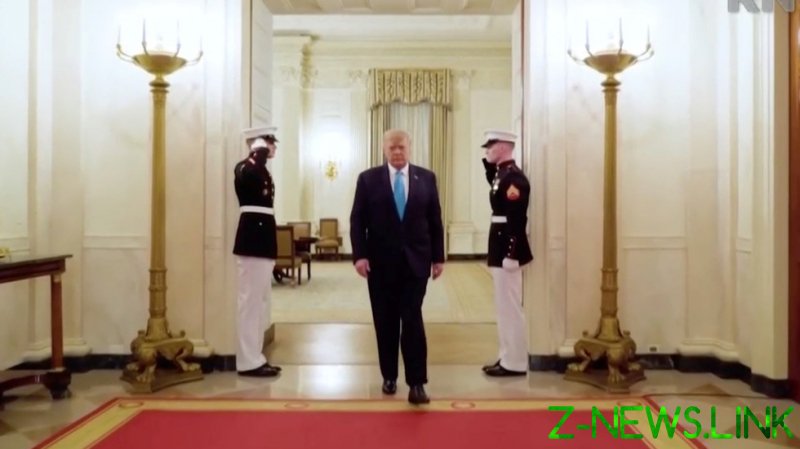 In the video, two Marines can be seen opening the doors for Trump as he walks into a room where the acting Homeland Security Secretary then administers the oath of citizenship to five immigrants. The event was aired on the second night of the Republican National Convention on Tuesday evening.

Trump’s critics, obsessed with finding ‘links’ between him and Russia for the past four years, quickly saw similarities with a video of President Vladimir Putin making an entrance at the Kremlin, and even produced a video intercutting the two.

The claim that Trump was copying “his mentor” Putin was then picked up by media personalities such as MSNBC analyst Malcolm Nance and other Resistance activists.

Others condemned the US Army for “hypocrisy” in investigating two soldiers who appeared in uniform during last week’s roll call at the Democratic National Convention, given that Trump supposedly used Marines as “props” for his own.

Two soldiers, wearing uniforms and face masks, had stood behind the American Samoa delegates to the DNC last week, in what critics dubbed a “hostage situation” video. The Army moved quickly to investigate the soldiers, members of the Army Reserve’s 9th Mission Support Command, for violating the prohibition on wearing the uniform to a partisan political event.

The DNC actually admitted to an “oversight” in the “composition” of the video, with party spokeswoman Xochitl Hinojosa saying that Samoa merely wanted to “highlight their commitment to military service when they filmed their segment.” The Pacific territory reportedly contributes more soldiers to the US military, per capita, than any state.

The Marines seen assisting Trump in the video were just doing their job, the Marine Corps told reporters after the media made inquiries about Tuesday night’s video. A small contingent of Marines traditionally serve as White House guards.

“The Marines in the footage of the ceremony at the White House were at their assigned place of duty,” USMC spokeswoman Major Melanie Salinas said in a statement on Wednesday. “Their official duty is to assist the president in office, those duties include opening doors for the president.”

Meanwhile, the White House said that the event was made public earlier in the day and that the Trump campaign decided to use the “publicly available content” for convention purposes, violating no laws.

Even as Democrats fumed over Trump using the Marines as “props” during the convention, both their nominee Joe Biden and former vice-president Al Gore have openly talked of the military being used to physically remove Trump from the White House in case he somehow refused to leave office. Meanwhile, the 2016 presidential candidate Hillary Clinton has urged Democrats to not concede election defeat “under any circumstances.”