Called the main difference between the human brain and primates 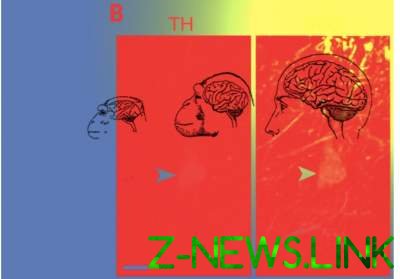 The main difference according to scientists is the volume.

The main difference between the brain of man and other primates is the expression of the genes responsible for the biosynthesis of various neurotransmitters, including dopamine.

It found American scientists, who conducted a transcriptome analysis of the brain of the three species of primates: the chimpanzee, rhesus macaque and human. The paper was published in the journal Science.

In the process of evolution the human brain has acquired a larger size (he is about three times more of the brain of the nearest surviving relative of modern humans — chimps) and a greater number of nerve cells, thus expanding the range of cognitive (and other) abilities of Homo sapiens. However, for better understanding of the causes that appears in the evolution of functional and anatomical differences between human brain and brains of other Primate species, they need to learn at a deeper level.

In order to better understand the molecular and cellular differences between the brains of different Primate species, the authors of the new work under the direction of Professor Yale University Nenad Sestan (Nenad Sestan) analyzed the transcriptome of 16 different brain regions of human, common chimpanzee (Pan troglodytes) and Macaca-rhesus (Macaca mulatta). Scientists sequenced 26.5 strands of RNA, including 16.5 thousand messenger RNA (mRNA), which stores information about the primary structure of the encoded proteins, and 3,2 thousand non-coding RNAS. Using this scientists were able to trace the differences in gene expression in various brain regions among the three different types.

See also:  Scientists have made an unexpected statement about Uranium

The researchers found lower or higher sensitivity (Engl. down-regulation/up-regulation — sensitivity to molecular effects, e.g., hormones or neurotransmitters) mRNA 11.9 percent and 13.6 percent of miRNAs in various brain regions characteristic of the person. These areas included the striatum (an important part of both the motor system and remuneration system), the thalamus (it processes sensory and motor information and is involved in regulation of circadian rhythms and attention), primary visual cortex and dorsolateral portion of the prefrontal cortex — one of the main parts of the brain involved in higher nervous activity. Interestingly, differences in gene expression in the new cortex (or neocortex is the most evolutionary part of the brain, which is best developed in primates) showed reduced sensitivity only 31 gene, including — repressed TWIST1, a mutation which is associated with mental retardation.

In addition, the researchers found characteristic of the human brain increased sensitivity genes, including two enzyme (tirosingidroksilazy and decarboxylase) involved in the biosynthesis of the neurotransmitter dopamine in the striatum, the hippocampus and the amygdala. Expression analysis of the genes of other primates, by contrast, indicated a reduced expression of these enzymes. After analyzing data from previous studies conducted on the developing human brain, the researchers also found that the expression of the enzyme tirosingidroksilazy increases during fetal development and adulthood.

Different sensitivity genes of the brain of humans and other primates explains the evolutionary advantage of the human brain. In particular, dopaminergic neurons in the striatum involved in the regulation of motor activity associated with the hippocampus and prefrontal cortex. In addition, dopamine, for example, is involved in the reward system of the brain (in the process of enjoyment, expression, motivation, and education). Scientists, therefore, say that the study of the evolutionary development of the brain necessary to analyze the expression of genes responsible for synthesis and other neurotransmitters.