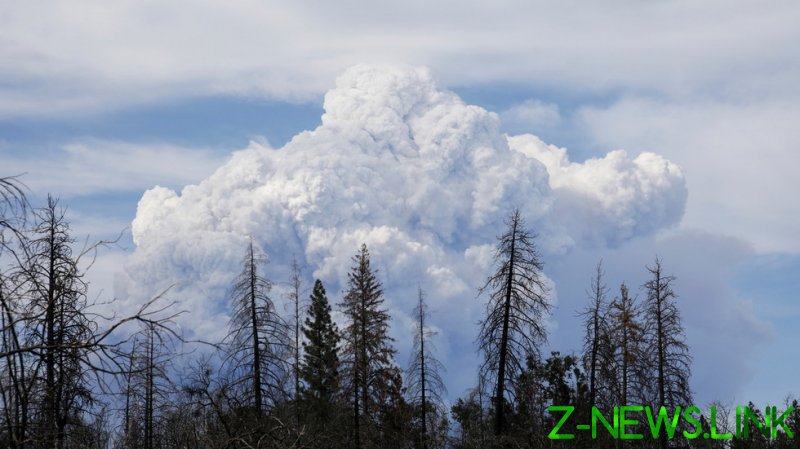 Documents posted to the utility’s website on Monday and filed with the California Public Utilities Commission indicate that a PG&E employee saw “blown fuses in a conductor on top of a pole, a tree leaning into the conductor, and a fire at the base of the tree” when he responded to a reported circuit outage around 7am local time last Tuesday. The equipment problem is believed to have helped contribute to the start of the Dixie Fire in Feather River Canyon, a devastating blaze which is still just 15% contained.

Unable to access the pole until nearly 12 hours after first taking note of the fire, due to “challenging terrain and road work resulting in a bridge closure,” the employee reported that upon returning to the site around 4:40pm local time, he encountered “a fire on the ground near the base of the tree” plus “two of three fuses blown and what appeared to him to be a healthy green tree leaning into the Bucks Creek 1101 12 kV conductor, which was still intact and suspended on the poles,” according to the report.

Only then did the worker call his supervisor – who subsequently called 911. Given PG&E’s abysmal track record of responding to wildfires (especially those linked to its equipment), it is perhaps unsurprising that the utility reportedly waited five days – rather than the required two to four hours – to report the nascent blaze to the state regulatory agency.

The Dixie Fire has already consumed more than 30,000 acres as of Monday, and continues to force evacuations in Plumas and Butte counties. PG&E’s systems reportedly showed an outage near Cresta Dam in the area of Feather River Canyon where the fire began. Mandatory evacuation orders remain in force in High Lakes, Bucks Lake, and Meadow Valley in Plumas County; Jonesville and Philbrook in Butte County are also under evacuation order. Cal Fire reported on Monday that 800 structures remain under threat.

PG&E has become notorious for its dysfunctional equipment’s apparent contributions to the increasingly devastating wildfires plaguing the region. PG&E equipment has been connected to at least one wildfire every year for the past four years, starting with the deadly 2018 Camp Fire.

The utility pleaded guilty last year to 84 counts of manslaughter, each count representing one life lost in the Camp Fire. The deadly blaze began in October in the town of Pulga, eventually engulfing 140,000 acres aided by high winds and low humidity. Some 8,700 homes were destroyed and tens of thousands of people forced to evacuate, while even those whose homes were spared the destruction were unable to go outside due to the extremely unhealthy air quality. The worst wildfire in California history, the Camp Fire killed 85 people and all but wiped out the town of Paradise.

The judgment pitched PG&E into a bankruptcy from which it finally emerged last year, with a promise to compensate fire victims for whatever damages had not been covered by their insurance – a sum of $13.5 billion that will be partially paid in company stock.

Last year, PG&E equipment was found to be partially responsible for the Zogg Fire in Shasta County. The company is still facing a criminal investigation over that blaze and was forced to pay out $43 million to local governments for that fire and the previous year’s Kincade Fire in Sonoma County. The utility still faces prosecution in Sonoma County over the 2019 fire.

Should PG&E continue to perform not just poorly but criminally, the utility could ultimately be taken over by the state, though California’s Public Utilities Commission requires the firm to progress through six ‘tiers’ of its so-called enhanced oversight program first. PG&E is already on the first tier, having been nailed for the shoddy job it did clearing out tree limbs and other kindling from its riskiest lines since November, and has pledged to spend $4.9 billion on “wildfire safety” this year.

Its promise to “do better” after four years of contributing to the devastating losses experienced by California residents was made as a condition for exiting bankruptcy. Meanwhile, company officials have attempted to blame drought and climate change, instead of taking responsibility.

PG&E has also outraged and alienated customers by shutting off power supply during peak usage hours for hundreds of thousands of people, hoping to prevent the sparking that has been known to cause wildfires out of fear that high winds could topple the power lines altogether.

An investigation by the CPUC accused the utility of lacking even a rudimentary safety strategy, noting it only makes “positive changes” when forced to do so by dire accidents like fires and explosions. The CPUC report itself was issued seven years after the explosion of a gas pipeline in 2010, which killed eight people and uncovered poor if not criminal business practices such as overcharging customers, underspending on maintenance, and in general placing profit over everything – including but not limited to safety.

This year’s fire season is already predicted to be especially devastating, with expectations it will be longer, drier, and riskier than previous years’ even as PG&E struggles to fix its decaying infrastructure.

Over 158,000 acres of Northern California forest have burned so far this season, including the Tamarack Fire, which grew to 23,000 acres as of Monday morning and remains entirely uncontained. It was reportedly ignited by a lightning strike earlier this month, and local firefighters made the questionable decision not to dispatch fire crews “because of safety concerns,” leaving Alpine County Sheriff Rick Stephens to explain the bizarre response to local residents who now face losing their homes to the inferno. The Beckwourth Complex Fire has burned over 105,000 acres as of Monday and is 82% contained.