Home / WORLD / California teacher takes down US flag because it made her ‘uncomfortable,’ invites student to pledge allegiance to Pride colors

California teacher takes down US flag because it made her ‘uncomfortable,’ invites student to pledge allegiance to Pride colors 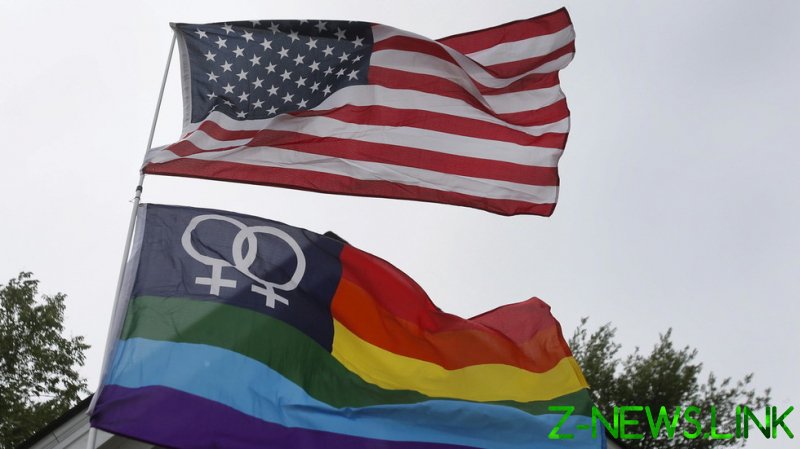 The problem, the teacher said with a laugh, was that she took the US flag down last year because it made her “uncomfortable,” and she hasn’t been able to find where she packed it away. Some students were puzzled about standing for the pledge without being able to look at Old Glory, so Pitzen told one, “We do have a flag in the class that you can pledge your allegiance to. And he like looks around and goes, ‘Oh, that one?” She pointed to a Pride flag on the wall and laughed.

In another video, the teacher showed the Pride flags in her classroom and said, “I pledge allegiance to the queers.”

Pitzen teaches English as a second language at Back Pay High School in Costa Mesa, according to her Linkedin profile, which had been removed as of Saturday. The school’s staff directory also had been taken down. Her TikTok account also appeared to be removed.

The Newport Mesa district told Fox that the incident involving the teacher was under investigation. “While we do not discuss employee-related matters, we can tell you that showing respect and honor for our nation’s flag is a value that we instill in our students and an expectation of our employees,” district spokeswoman Annette Franco said. “We take matters like this seriously and will be taking action to address it.”

Conservative social media users blasted the teacher for disrespecting the American flag and forcing her beliefs on students. “Perhaps teaching in Kabul would be more to her liking,” marketing strategist Jeff Goldman said on Twitter. “I hear they won’t  have any American flags there by next week.”

Other observers called the incident the latest evidence that parents should educate their children at home or put them in private school.

Conor Friedersdorf, a staff writer at the left-leaning Atlantic magazine, accused the social media group that called attention to Pitzen’s videos, called Libs of Tik Tok, of engaging in “cancel culture” by “piling on this random teacher.”

But some observers pointed out that Libs of Tik Tok merely exposed publicly posted videos and didn’t call for the teacher’s firing, while others noted that Pitzen was being criticized for her conduct as a teacher, not for having objectionable opinions.

Richard Grenell, former acting director of national security, criticized parents for allowing such abuse of authority by teachers. “What kind of parent would allow their child to be taught by this wacko?” he asked. “Why are parents turning their kids over to someone they don’t know? I’d like to talk to people who think this is good.”