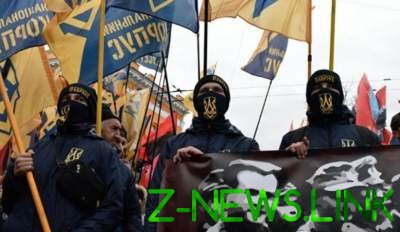 The document notes that “members of the nationalist hate groups”, committed arbitrary detention of people.

Bureau of democracy, human rights and labor, U.S. Department of State in its report on the observance of human rights in Ukraine in 2018 called the nationalist organization C14 and “Azov” “hate groups”.

This is stated in a report released March 13.

The document notes that “members of the nationalist hate groups, such as C14 and national building”, committed arbitrary detention with the apparent consent of the law enforcement agencies, made attacks on journalists, representatives of ethnic minorities (Roma) and the LGBT community.

As an example, cite numerous cases of attacks on Roma settlements (in particular, in Kiev, on the outskirts of Lviv, Ternopil, Beregovo, Uzhgorod, Mukachevo, Zolotonosha), illegal detention of members of the C14 alleged militants “LNR” in the Kiev region on March 14, and the transfer of the SBU, the attack on the journalist who covered the trial of the members of C14, accused in the attack on the Gypsy camp.

As well as attacks by nationalist hate groups on the participants of the public events of the LGBT community in Uzhgorod, Lviv and Kiev in March 2018. It is noted that the police briefly detained the attackers, but charges were not put forward.

It is also noted that investigative journalists over the years exposed several cases when the government provided grants or collaborated with the hate groups.

“On 8 June, the Ministry of youth and sports has announced that it will reward C14, nationalist hate group, 440 thousand UAH for the youth summer camp”, – the report says.

It is reported that C14 and other groups of hatred entered into a formal agreement with the municipal authorities in Kyiv and other cities, to form patrol units “municipal security” to ensure public safety. And that interview in the December 2017 head of C14 described the cooperation with the security service and the police.

“The failure of the police and prosecutors to prevent such acts of violence, properly classify them as crimes of hate and to effectively investigate them, have created an environment of impunity and lack of justice for victims,” the report says.