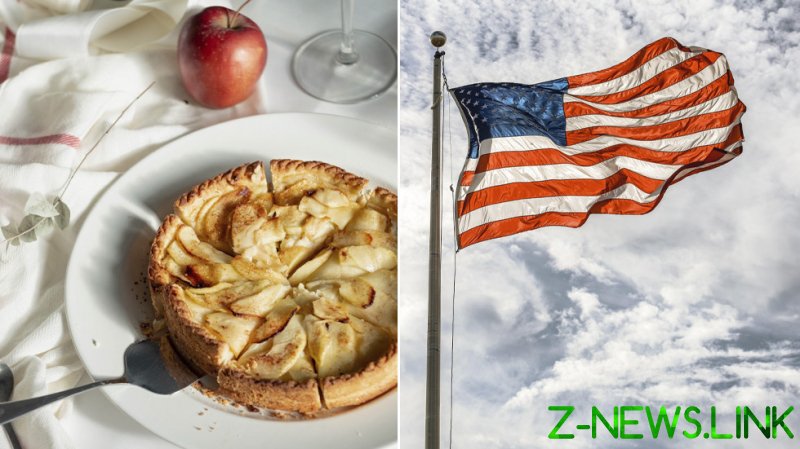 In the Guardian piece: ‘Food injustice has deep roots: let’s start with America’s apple pie,’ the writer, Raj Patel, author and a research professor in the Lyndon B. Johnson School of Public Affairs at the University of Texas, makes the case for why Americans should perhaps not be too quick to enjoy a slice of apple pie.

“The apple pie is as American as stolen land, wealth and labor. We live its consequences today,” the author says in the lengthy piece, which dives deep into the racist roots of that oh-so evil dessert.

Why is the apple pie so controversial, you may wonder? Patel details the treat’s history, from English colonizers bringing the fruit over along with their “vast and ongoing genocide of Indigenous people.” They even used apple trees as markers of property.

Patel makes similar rabbit hole arguments for everything from the gingham cloth (the pattern is probably Malay, ackshually) the dessert is often served on, to the sugar inside, which Patel links to the slave trade and “war capitalism” which “enslaved and committed acts of genocide against millions of Indigenous people in North America, and millions of Africans and their descendants through the transatlantic slave trade.”

While Patel’s piece was published last month, it recently caught the attention of numerous conservative pundits, many of whom blasted the windy rant for targeting a symbol so closely linked with the US by using loose threads to connect it to racism.

Combating racism and fighting for social justice are righteous causes, but Patel is one of numerous examples of people who work too hard to tie these causes to vague, but attention-grabbing points that may grab clicks or garner debate.

On the list of things related to racism and the history of indigenous people that need to be contemplated and debated, apple pie ranks fairly low, if it ranks at all. The hunger to cancel something, anything has grown so big that now we have people debating the racial pros and cons of a dessert eaten by – guaranteed – a majority of people who don’t give one thought to race when they’re eating it.

The apple pie nonsense seems to be an extension of a larger effort being pushed primarily by far-leftists to equate iconic and recognizable American symbols with hate. “Put that apple pie down, racist, and contemplate the history of every horrible thing you had no control over that went into that treat!” is only one step away from the New York Times’ Mara Gay recently exclaiming in an MSNBC appearance that seeing dozens of American flags flying during a recent trip to Long Island was “disturbing.”

It’s as if the calls to cancel everything remotely offensive have grown so loud that one must choose as unique a target as possible – desserts! Pieces of cloth! – if they want others in their social justice mob to listen.

While more conservative pundits similarly pushed back against Gay’s comments, it only led numerous other journalists to make a further effort to equate the flag to images of hate, using threads as loose as Patel’s.

It’s as if the mere fact that these ‘American’ signatures are connected to people liberal pundits find offensive and threatening is enough to cancel their standing altogether. If ‘high-minded’ liberal thinkers so concerned with social justice decide apple pie is a historically damaging pastry or the flag being waved means you’re a racist, then we all must fall in line and think the same.

The ease with which modern activists posing as journalists will insult millions of people and imply that they are racist, hateful or ignorant simply because they eat a meal without contemplating the greater history of racism or fly the flag of their own country is what is actually offensive here.

With Dr. Seuss feeling the cancel culture axe in the grave, and continuous other examples of free thinkers whose livelihoods are put on the chopping block passing by, and now efforts to destroy apple pie and the American flag, it’s clear nothing is sacred anymore, and the closer something is related culturally to America, the worse it is.

Perhaps, though, we could find better cultural phenomena to debate than flags and apple pie because, at the end of the day, it’s okay for one to just be a flag and the other just a tasty dessert.