By trying to link Russia & Nord Stream 2 to Belarus’ grounding of plane, Western talking heads have failed to understand crisis 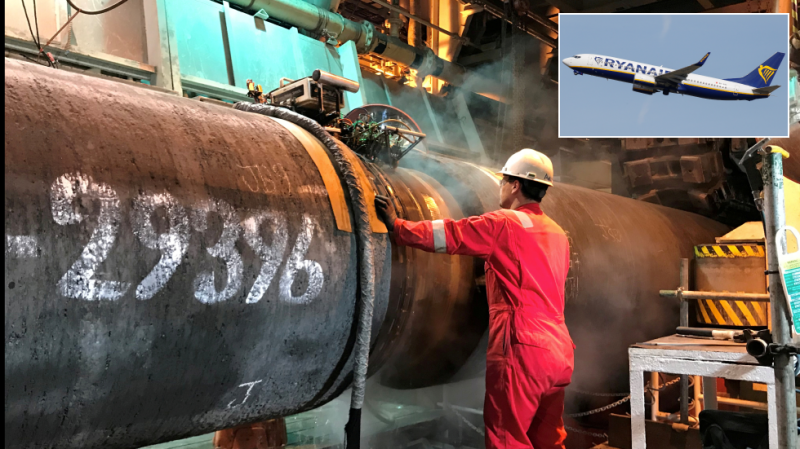 However, that hasn’t stopped a number of EU and UK lawmakers from suggesting targeting the controversial Nord Stream 2 gas pipeline, currently under construction, over Belarus’ apparent decision to intercept a passenger plane, despite the project being Russian-backed, and the fact that any attempts to block its completion would actually help Belarus’ economy.

On Sunday, a flight operated by Irish carrier Ryanair from Greece to Lithuania was diverted while in Belarusian airspace and instructed to land at an airport in the capital, Minsk. Air traffic controllers issued a security warning, indicating that a bomb could be on board. The crew, who questioned the order to turn back, given they were already closer to Vilnius airport, eventually complied, with a fighter jet scrambled to accompany the passenger plane. “If a military aircraft intercepts you and gives you command, you obey,” one aviation expert told the BBC in the aftermath.

The potential motivations behind the incident became clearer when it emerged that Roman Protasevich, the editor of the opposition-aligned Belamova Telegram channel, classed by officials in Minsk as an “extremist organization,” was on board the flight. The 26-year-old and his girlfriend, a Russian national, were arrested by police on landing.

Protasevich has since appeared in a strange “confession” clip in which he rejected earlier claims that he had been hospitalized. He also said that he had played a role in organizing the unauthorized mass protests that took hold in the country after last year’s presidential election, which activists and many international observers claim was rigged in favor of veteran leader Alexander Lukashenko. At that time, the activist worked for NEXTA, a Warsaw-based Telegram channel that authorities say helped to coordinate demonstrations.

The video has sparked concerns that he may have been beaten or coerced, with opposition figurehead Svetlana Tikhanovskaya accusing the government of torturing him. She demanded his release, and that of “political prisoners” across the country.

As the EU mulled its response to the interception of a commercial flight between two member states, rumors quickly swirled that Russia had played a shadowy role in the operation, adding yet another dynamic to the story. Prominent talking heads pointed the finger at Moscow, such as Bill Browder, a hedge fund tycoon and former Kremlin supporter who has championed sanctions against Russia over the death of auditor Sergei Magnitsky.

Browder cited unconfirmed reports that “four mysterious Russians” had disembarked the plane alongside Protasevich and his girlfriend, as reports came in that security agents might have infiltrated the flight to put pressure on the crew to land. Radek Sikorski, a prominent member of the European Parliament, said that if these claims were true, “then Russian personnel and Russian assets should also be sanctioned.” British MP Tom Tugendhat also added his voice to the growing chorus of the concerned, saying that the Nord Stream 2 and Yamal energy pipelines should be targeted. Tugendhat said these two energy thoroughfares are “where the money comes from that supports this tyrannous regime.”

Once construction work is completed, Nord Stream 2 will effectively cut much of Central Europe from the route taken by gas exported to the West, taking it instead under the Baltic Sea. By doing so, it will slash the gas transit fees received by countries like Ukraine and Belarus. For this reason, any suggestion that Nord Stream 2 funds Lukashenko’s government is clearly false. However, those calling for sanctions on a high-profile and controversial Russian project seem to require less justification than would be the case if it were located anywhere else in the world.

In a departure from careful diplomatic language, European Council President Charles Michel, deliberately or accidentally, risked misunderstanding when he insisted, “we won’t tolerate that one can try to play Russian roulette with the lives of innocent civilians.”

However, the case for Moscow’s involvement soon fell apart, with the identities of those who stayed behind in Minsk being quickly disclosed. Aside from Prostasevich and his girlfriend, two Belarusian nationals, Alexandra Stabredova and Sergey Kulakov disembarked. The final passenger who decided to get off the plane was a Greek man, Zisis Yason, who in a strange twist of fate was headed to the city anyway to see his girlfriend, but had booked an indirect flight. This information has since been verified and confirmed by the likes of the New York Times, while investigative outfit Bellingcat, which rarely shies away from criticism of the Kremlin, warned any link to Russia could be a “hoax.”

The willingness to blame Russia for any malign activity is revealing in and of itself, but it also uncovers a lack of genuine understanding about the country’s intentions in the region. While Moscow continues to position itself as Belarus’ main, or possibly only, ally, the Kremlin would have been unlikely to think highly of a proactive scheme that risked an explosive confrontation with the West to detain the 26-year-old editor of a relatively minor Telegram news channel. All the more so at a time when Russia has been pushing to de-escalate tensions with the US and EU, and just as American President Joe Biden appears to have dropped Washington’s objections to the Nord Stream 2 gas pipeline to Germany.

In reality, few policymakers or commentators in Moscow believe that the current status quo in Belarus is stable in the long term. The allegations of election fraud and the widespread, resilient protests that followed, as well as the heavy-handed police crackdown, have shredded Lukashenko’s perceived legitimacy at home and abroad. Many Russians were shocked by how quickly the situation in the neighboring country deteriorated, and many of them know people directly affected by the crisis there.

However, the basic position that Belarus’ future should be determined by Belarusians has been complicated by suspicions that the West is seeking to use it to play out a proxy conflict with Russia in the region. Earlier this month, Russian pranksters ‘Vovan and Lexus’ duped Washington’s National Endowment for Democracy (NED) into admitting the extent to which it had funded “community organizing” in the country in recent years. One official even went as far as to say that “we believe that this long-term trust-building that we have had with partners in Belarus has indeed brought the events, or the build-up to the events, of last summer.”

This will have raised eyebrows in Moscow, where there had already been concerns that Tikhanovskaya and other leading opposition figures had close links to the West. Russia’s basic position appears to be that a transition of power is not only desirable but inevitable, although only if it is genuinely domestic, and not imposed on the country from afar. Having seen how Western-backed activists pulled Ukraine from being a close ally to an almost existential opponent in the space of a few short months after the 2014 Maidan, the Kremlin will feel justified in those concerns.

Russia has urged caution in the case of the Ryanair grounding, with Foreign Ministry spokeswoman Maria Zakharova accusing the West of becoming “hysterical” over the incident. She and Foreign Minister Sergey Lavrov have compared the incident to a previous case in which a plane flown by Belarus’ flag carrier, Belavia, was ordered to land in Ukraine in 2016 without justification.

The diplomats’ calls for a measured response might jar with Western Europe’s outrage at Minsk’s brazenness, but it may prove to be the most sustainable situation in the long term. The EU, UK and US actually have relatively few tools in their arsenals. Crushing economic sanctions are possible, but would harm the economies of nearby member states like Poland and the Baltic nations as well – not to mention ordinary Belarusians, whether they have major reservations about Lukashenko or not. Likewise, restricting air traffic may well reduce the risk of this situation repeating itself, but it could also make it harder for people to leave the crisis-hit country altogether.

Belarus is currently locked in a stalemate, with Lukashenko unable to remain in power in the long term, but apparently unwilling to end his crackdown on those behind the protests. The best thing that could happen to end that stalemate would be for those in the West to stop treating it like a political football to be booted at Russia’s borders, and to refrain in its response from making life worse for ordinary Belarusians.