By the fall of the protest mood in Russia may increase 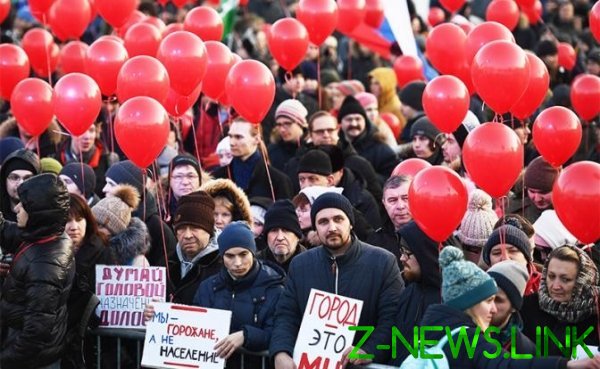 In Russia started the next elections on 8 September 2019 in more than 80 regions of the country scheduled elections for governors, deputies of legislative assemblies and heads of municipalities. According to participants “a round table” on the topic “Update. New heads of regions through the eyes of their constituents”, which was held yesterday at the site of the Expert Institute of social studies, many of the current acting heads of regions have good chances to win in the first round.

Election of deputies of the Moscow city Duma, in which, by the way, it will be an experiment for the organization of electronic voting. According to experts of the Agency for political and economic communications, domination in the city Parliament has a chance to achieve the “United Russia”: the party pool of candidates will take at least 37 of the 45 seats.

However, sociologists point out that there is a decrease in voter confidence in any party brands in principle. “It is significant that even at the peak of the growth of protest moods in the summer-early fall of 2018 was observed in only a limited increase in support for opposition parties — amid the departure of a large part of the disaffected voter apathy and distancing from any political forces. This situation — when significant challenges for the ruling party, creates serious space possibilities for the “United Russia” and for candidates, campaigns which involve close interaction with it”, — noted in APEK.

Not see aggressive rejection of the “United Russia” by the Muscovites and the Director of Institute of selective technologies Evgenie of Knots. “In Moscow the rating of “United Russia” is not the greatest, but not critically low. There are regions, for example, Astrakhan oblast, where the “United Russia” very negative attitude. In Moscow it not,” he said during the meeting of the expert club “Region”

He also noted that none of the campaign for elections of the Moscow city Duma, except for the 1995 campaign, opponents of the current regime is seriously not manifest itself. Political developments that would have implications for the power system on a national scale, either. And while protests, in his opinion, in Moscow exist, but they are latent in nature.

Vice-President of the Center for political technologies Rostislav Turovsky considers that on the eve of elections to the Moscow city Duma in opposition there is a split. Which is evident by the number of advancements and inconsistency of positions. “The turmoil in many districts are already visible, and it suggests that the opposition is pursuing the interests of their own groups and will be combined with the work that will be profitable pool of loyal,” he stressed.

See also:  Residents of Transcarpathia warned of the dangerous rise of the water level in the rivers

The head of the Center for the development of regional policy Ilya Graschenkov noted that, according to the data, including closed surveys four regions of Russia are the epicenters of calm. This is Moscow, St.-Petersburg, Sevastopol and the Crimea. However, in most regions of Russia there are protests.

— Moscow, Saint-Petersburg, Crimea and Sevastopol are pockets where, in the opinion of the population, socio-economic situation improves. Although overall in Russia there is a huge gap and a failure. In some regions, the inhabitants feeling that they are living worse, up to 70%. Therefore, the first such gap is, in my opinion, that in Moscow and St. Petersburg due to their financial situation there is a lack of understanding of what is happening in the rest of Russia? Why are there people began to feel worse?

Second, there has been a drop of 50-60%, but yet the wave effects of the fall on power ratings. Moreover, all levels of government: the governors of the party “United Russia” directly to the President. In my opinion, it will cause some effect of wave — people will feel worse, will fall first the rating of the local authorities (these will break the first anger).

But since the point of occurrence of the falling rating of United Russia from this socio-economic effect would be a fall, then the fall may increase and the amount of dissent. And if there are some “pockets of fire” (they can be different — environmental, national, economic, someone will stop to pay the salary, etc.), where the protest can occur, it will be the external manifestations of protest.

In Moscow, everything is more or less calm. To expect that will change radically the balance of power in the elections to the Moscow city Duma is not necessary. Unless there is some extraordinary situation. Like a suburban landfill, which, in particular, akkumuliruya and the Moscow protests of environmental issues.

Something will happen, because all the imposed lack of clear communication of power to the people. Important to protest the government itself sometimes creates. Hard to say what will be the next spark for the ignition of the flame.

In short, the protests in Russia have, they will develop. But different in different regions.

See also:  Russia: on the beach, the SUV knocked down a woman

“SP”: — In what regions the protests are strongest?

— Almost everywhere. Especially in the far East, in Siberia, in the Central Federal district. In the northwestern Federal district — Arkhangelsk and Komi Republic — a sharp fall of the rating of government at all levels, the request for change of governors. The reason, of course, was environmental protest. But I fancied not only that. And the overall socio-economic depression and falling living standards.

Khabarovsk Krai has recently elected a Governor from the liberal democratic party. And now, it seems, can’t shake it: is willing to carry all the “United Russia” from the face of the region.

Similar situation on Sakhalin. There is a request for change local authorities on the Kamchatka Peninsula, Chukotka. In Magadan, as we have heard, even Putin’s rating has fallen dramatically.

In Tuva, also recorded a request for a change of government and a willingness to go to rallies. Although the rating of the ruling party are high.

In Dagestan traditionally there is a clan struggle, which gives the opportunity to show massive protests.

“SP”: — whether the opposition is divided and it prevents her from presenting a United front to achieve a more serious mission?

— Despite what the opposition say. If — on the parliamentary, that is, the Communist party, which is now actively increasing its presence, and the electoral rating. In some regions it is ready to cooperate with its allies on the left block, like “Fair Russia”. And even with the ideological competitors, like the liberal democratic party. The effect is obvious — the Communist party where many have increased their presence in the legislatures and some governors (from the Communist party — ed.) chosen.

The liberal democratic party about the same approach. But, to a lesser extent because the structure of the party suggests a unifying character. They have quite a radical approach.

If we talk about the liberal opposition is, of course, the option of intraspecific struggle. No sooner had somewhere to go, already at loggerheads within itself. The reason, unfortunately, is the leadership approach to the formation of the opposition. There is, for example, Bulk. And no one can be out and out autocratic principle.

This course of conduct or otherwise copy any other liberal opposition. That is, the structural work was doomed to figuring out — who is the leader?

Unfortunately, the wheel once again makes a circle. And in this election all over again.