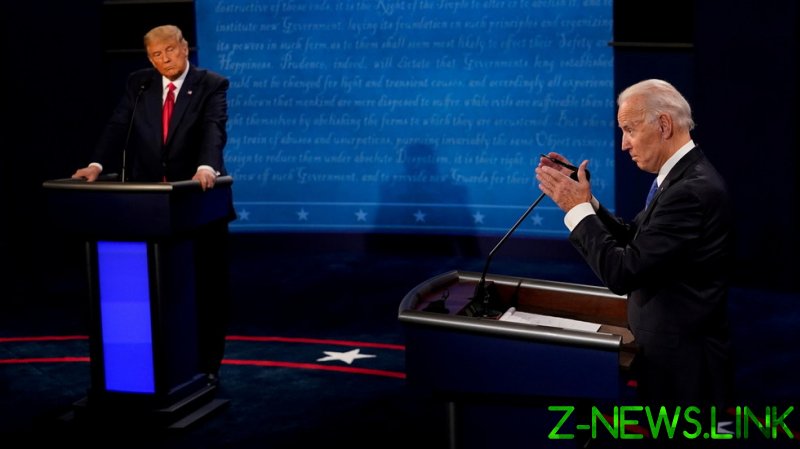 Only 43% of American voters surveyed earlier this month approved of Biden’s performance – down from 49% in August, according to the results of a Gallup poll released on Wednesday. The president’s approval rating has now dropped 13 percentage points since June alone, and disapproval of his performance rose to 53% in September from 48% in August.

To put that in perspective, only 37% of survey respondents said they disapproved of Biden’s performance after the Democrat took office in January, and 57% said they approved. In fact, Biden enjoyed a five-month honeymoon with voters, according to Gallup, as his approval rating ranged from 54% to 57% from January through June.

Perhaps more worrying for Democrats, voters are looking at former president Donald Trump more favorably as they watch Biden’s performance on such issues as the Afghan withdrawal, the US-Mexico border crisis, and the Covid-19 pandemic.

Harvard CAPS/Harris Poll results published earlier this week showed that 48% of voters had a positive view of Trump in September, compared with 46% who said they favored Biden. The result marked a huge shift from earlier this year. In fact, in February, Biden led Trump by 13 percentage points in the same poll, at 56% to 43%. As recently as May, he had a 12-point edge in positive ratings, at 57% to 45%. In terms of popular vote, he defeated Trump by 4.4 percentage points in last November’s election.

The Harvard CAPS/Harris Poll also showed that 51% of voters now consider Trump to have been a better president than Biden, compared with 49% who sided with the Democrat.

Gallup’s polling has shown deteriorating support for Biden among voters of all political stripes, but Democrats and Republicans have been sharply divided on his performance all along. The biggest needle-mover appears to be independents, only 37% of whom now approve of Biden’s performance. That’s down 18 percentage points from June’s level and a whopping 23-point drop from the 61% approval rating independents gave the new president in January.

A separate poll by Morning Consult, released on Wednesday, showed that Biden apparently alienated many black voters with his September 9 order that US businesses with 100 or more employees force their workers to get vaccinated against Covid-19. His approval rating among unvaccinated black voters plunged from 35% the day before the announcement to just 18% on September 20, the data firm said.

Even among vaccinated black voters, his rating dropped to 69% from 75%, while approval slid to 47% from 59% among all black respondents, Morning Consult reported. On August 14, the day before Kabul fell to the Taliban, Biden had a 64% approval rating among black voters.

The decline is startling in a key demographic for Biden. Black Americans arguably drove his election victory, giving the Democrat an overwhelming 92% of their votes and keying his wins in swing states such as Pennsylvania, Michigan, and Georgia.