Home / WORLD / But Afghanistan! German tabloid Bild chastises Merkel for being ‘in a good mood’ at documentary premiere amid Kabul chaos

But Afghanistan! German tabloid Bild chastises Merkel for being ‘in a good mood’ at documentary premiere amid Kabul chaos 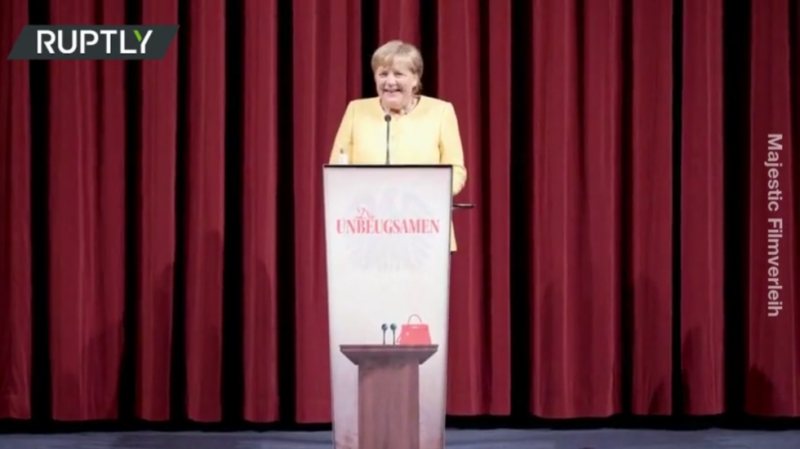 As Western nations including Germany were scrambling to evacuate people from the Hamid Karzai airport in Taliban-captured Kabul, Chancellor Merkel went to a movie theater, Bild reported. She “was in a good mood” when attending the premiere of a documentary at Berlin’s Delphi Film Palace and posing for the media with a group of other prominent German female public figures.

The tabloid seemed to feel her behavior was inappropriate, leading the story with “Germans fear for their lives in Afghanistan, and Merkel laughs at the cinema,” and calling the withdrawal of NATO troops that led to the Taliban takeover “also her personal defeat.”

The criticism is quite ironic, considering what the documentary that premiered on Monday evening was about. ‘The Unyielding’ by director Torsten Korner explores the fight that female politicians waged in Western Germany to be accepted as equals by their male counterparts.

The film is full of clips showing entrenched powerful men mocking and demeaning women who wanted their roles to go beyond choosing what to wear and what to cook for their families. Those fighters, many of whom surrounded Merkel for the red carpet line-up, blazed the trail that led to her election as chancellor in 2005.

The Kabul crisis did cast its shadow over the event. Hours before attending the theater, the chancellor gave a press conference, calling the dramatic events in the Afghan capital “bitter, dramatic and terrifying” for Germans and detailing the military’s contribution to the ongoing evacuation efforts.

Speaking at Delphi, Merkel said her thoughts were with the women of Afghanistan, who “have to fear for their lives because they have become politically active,” and contrasted the threat to the safety and legal protections that women in Germany have. But she warned that the gains need to be protected, including from “verbal attacks, threats and even blatant hatred, especially on the internet and on social media” that German female politicians face today.

One of the longest-serving leaders in German history, Merkel is not seeking reelection for a fifth term. Her replacement will be selected next month in a general election.