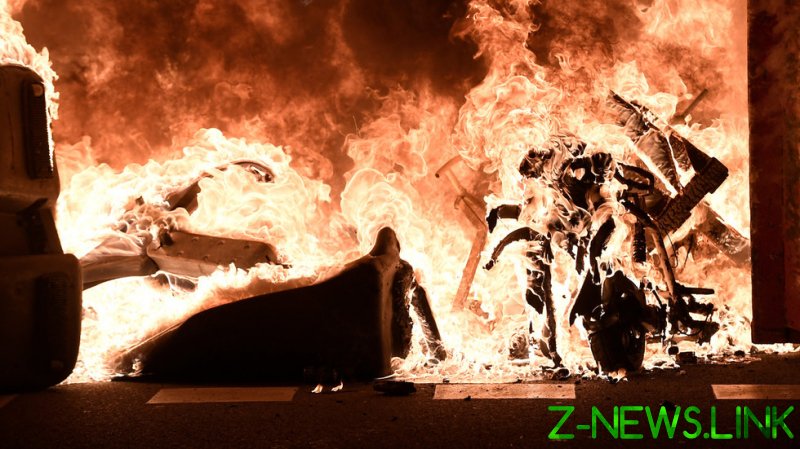 “Don’t burn the tree,” said one young protester to another, as he pulled yet another big recycling bin into the flames, “Pau, Pau! You’re gonna burn the bloody tree!”

A gang of maybe eight youngsters, all under the age of 25 or so, then started to move the perilously erupting bins away from the tree because its foliage overhead was catching fire. The traffic lights next to it, though, they were left to melt and form a yellow puddle on the road.

There are two dominant smells that perfume the air on nights of civil unrest in Barcelona: burning plastic and marijuana, usually the super-strong skunk variety.

Then there are the sounds of chanting against “the fascist state” of Spain and cries of “Free Pablo Hasél”, followed by sirens and rocks smacking into police vans. These ingenious youngsters generate their projectiles by lifting up the heavy steel caps that sit on every street over maintenance shafts and using them to smash the paving slabs into handy throwable lumps.

Not long after the sounds of stones hitting vans, of course, comes the inevitable ‘pop pop pop’ sound of rubber bullets being fired by the cops in the opposite direction. I dunno why they call them rubber ‘bullets’ because they’re actually about the size of a hand grenade. I know, because one hit me on the ankle, and I kept it as a souvenir. It’s kind of like a big black bouncy ball – the type you throw for a dog.

Oh, and that was shortly after a protester’s pavement chunk had hit me on the head. Luckily, I’d just pulled on a helmet – a helmet I had resisted wearing because it seemed absurd to be wearing it on the streets of Barcelona. I had worn the thing only once before, in another city beginning with B: Baghdad. Maybe I’ll head to Berlin or Budapest next. I’ll pack my helmet.

Journalists, you see, tend to be somewhere in the middle – the worst possible place to be, if true safety, rather than the story, was the priority. And that’s another difference between Baghdad and Barcelona: there are almost as many ‘journalists’ on the streets of the latter these days as there are protesters. And they can get in the way a bit.

Take, for example, the TV journalist a while ago at an earlier – yet identical – protest who was broadcasting live to God knows where, in French. She stepped into the street at the precise moment a platoon of riot police lifted their weapons to fire a volley of rubber bullets. The boss cop, luckily for her, noticed her just in time. A shame, maybe, as it would have made a wonderful, career-defining bit of live telly for whoever happened to be watching, and she’d have had a great anecdote to tell from her hospital bed. Ever seen the stoning scene in Life of Brian? It would have been a bit like that.

Except the injuries are real enough. I saw a journalist friend last night and his arm was in a sling, having been hit by a rubber bullet. Another photographer friend was hit in the middle of the chest at a similar demo a little while back and had trouble breathing for days. A young protester lost an eye the other night. That’s the thing with a rubber bullet: it’ll probably give you only a mild injury if it hits you in most places on your body, but if it gets you in the eye, that eye becomes a bloody pulp. I’ve seen it.

I’ve lived and worked in Barcelona for many years and know intimately the ins and outs of why these kids are taking to the streets. The current unrest was sparked by the arrest of a rapper called Pablo Hasél. But it’s not about him. Not really.

It depends how far you want to go back – and, believe me, many independence supporters will take you way back, if you’ve an hour or two free, back to the Middle Ages and on to the age of Napoleon and into the era just after the First World War.

Suffice it to say, after the Spanish Civil War ended in 1939 and General Francisco Franco took control until his death in 1975, the Catalan people have felt repressed, for the simple reason that they were repressed. Particularly their language, which managed to live on inside people’s homes, despite being outlawed. Things have changed a bit since then, though. Catalan is now the main language in state schools here.

So, what’s the problem? Well, the minutiae can be truly tedious, unless you’re into it. But, basically, the Catalan people wanted more autonomy, and some wanted outright independence. However, Madrid had no intention of giving them either of those things, for financial and political reasons. Plus – let’s be honest – there are still echoes in government from that Franco era. There just are.

The single biggest factors, though, I have to say, are crass stupidity and political idiocy on all sides. For example, these kids have weaponised the big council recycling bins in which residents and businesses dump their rubbish each day. They’re easy to move into the road and set light to, the ones filled with cardboard and paper being particularly effective.

These bins are like Dr Who: they just regenerate every day. One team of council workers comes and cleans the streets and scrapes the melted plastic off the highway, while another team comes along with… fresh bins, fresh ammunition. Why not, for a little while, find another solution for the collection of waste until the city calms down?

It’s simply not the Spanish, nor the Catalan way – they are far more similar than some Catalans would like to accept – for someone to actually stand up and accept the responsibility, take the initiative and quickly make any kind of decision or change. Like, for example, ‘Let’s just remove the bins for now.’ And maybe let people park their mopeds for free in the dozens of vast underground car parks, so they don’t become fuel for the fires.

That, to me, is indicative of what’s gone wrong here. The low-grade people who make up the political class, the decision-makers in Spain, and in Catalonia, are the main problem. They’re just, well, a bit thick. They have no political judgement nor foresight whatsoever and are pretty damn ineffective.

Look at Britain, for example, it was actually a very smart move of David Cameron when he was prime minister of the UK to allow the Scots to have their referendum. Yes, Westminster would have been forced to accept it if the Jocks had voted ‘adios’ in 2014. But they didn’t. Those in favour of separation are again making a load of noise – of course they are – but Boris Johnson can point at this decision and simply say: “You can’t have a referendum every week until you get the result you want.”

The government in Madrid was too dumb to realise this, though they had three years to learn the lessons from the UK. They were just too stuck in their Franco-era ways. If the political leaders had taken the risk and allowed a legal referendum, they could have won the argument and won the day, and the problem would have gone away. But they were way too dumb and their instincts way too authoritarian to realise this.

Yet the stupidity was not confined only to the Spanish side. Oh no. In 2017, out of sheer frustration at Madrid’s inability to adapt to a changing political landscape, the Catalan parliament unilaterally declared its own referendum, which was not technically even legal. The separatists won. Then that floppy-haired fool, Catalan then-president Carles Puigdemont, allowed the weird signing of a non-binding declaration of independence.

Though he made a swift exit and is now living in comfortable exile in Belgium, they’ll probably name streets after this dope. But that unilateral declaration of independence was amateurish and stupid because it pushed Madrid to act and also, crucially, forced the EU into assuming a position against Catalonia.

The European Union is a club. Yes, the Catalan people are EU citizens, but the Spanish state is a fat, full-on fee-paying member of the club. And Catalonia most certainly is not and, it seems from the EU side, never will be. Try being an independent state without the euro. Egged on by Spain, the EU could tie an independent Catalonia up in red tape and tow it out into the Mediterranean where it could well sink without trace.

Puigdemont and his pals missed their moment. The moment came when the police left their barracks on that fateful referendum day in 2017 and started dragging grannies away from polling booths. I have friends who were going to vote to remain in Spain in that referendum, but they saw those images and voted to leave.

Pretty much all protests before this had been peaceful, but that Franco-style police brutality changed the rules of the game. Again, though, nobody in power had foreseen this – though many on the ground, including me, had. And no leader issued a firm command to confine the police to their barracks. The referendum was not legally binding anyway so why disrupt it? Idiots.

That was the Catalan moment. They could have ridden that wave of outrage to independence, but it would maybe have taken a decade or so. Instead, they believed their own hype and leapt off an Iberian cliff towards an independence that didn’t even exist, not in that moment. Dumb, dumb, dumb.

Protests followed, especially when the separatist leaders were jailed in the autumn of 2019 -– again, that brute stupidity of a Third World state. Then youngsters took to the streets and took to burning bins and throwing broken bits of pavement at cops – many of whom, I’m sure, because I know some, are actually sympathetic to their cause.

In this latest balls-up, how utterly moronic was it to go and arrest this rapper dude for abusive words in songs and tweets? If the authorities had just ignored him, few people would have even known his name.

Lots of Catalan people now see themselves trapped in an abusive marriage because – well, in a way, they are! A kind lady, Rosa, allowed me to use her balcony to get a wide view of the demonstrators last night. She was torn between her anger at these kids burning stuff and damaging the streets, and being in absolute harmony with their cause.

“We’ve had enough of Spain and their fascist ways and their instinctive brutality and corruption,” she told me after pushing an ice cold beer into my hand. “We really have. We want to go our own way.”

Anyway, the kids are back out again. This time for rapper Pablo Hasél. It’ll burn itself out, sooner or later. Until something else sets it all off again.