Home / WORLD / ‘Burn the precincts to the ground!’ Vigil for Daunte Wright turns into riot & clashes outside police station in Portland (VIDEOS)

‘Burn the precincts to the ground!’ Vigil for Daunte Wright turns into riot & clashes outside police station in Portland (VIDEOS) 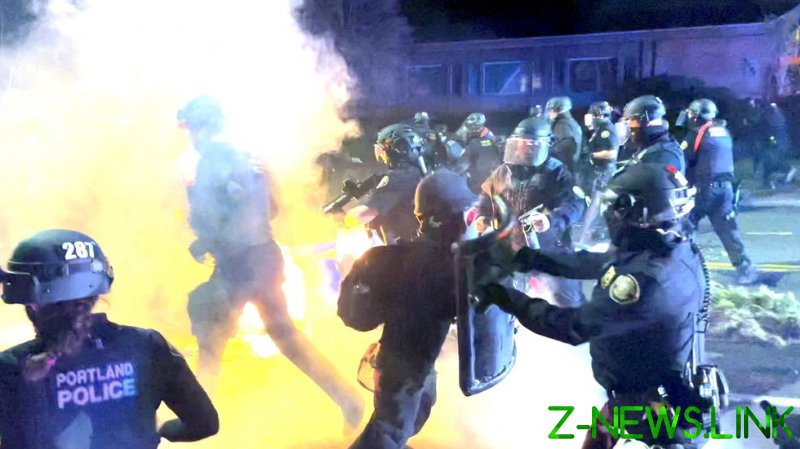 After attending a vigil for Daunte Wright, who died in a botched arrest attempt in Brooklyn Center, Minnesota, protesters staged a march, chanting, “Every city, every town – burn the precincts to the ground!”

The crowd headed towards the Penumbra Kelly building, where the city’s police precinct and a local sheriff’s office are located. According to local TV channel KWG, there were around 250 protesters.

Police said people were throwing bottles, rocks, and fireworks at the officers, as well as breaking windows and starting fires as they attempted to break into the building.

A riot was declared and the protesters were ordered to clear the street. They refused to do so, after which police deployed crowd-control munitions.

Activists believe that Wright’s death is the latest case of systematic bias and racism against black and Latino people by police.

Wright, 20, was pulled over on Sunday in what was initially a routine traffic stop. Police discovered that there was an arrest warrant out on Wright, and tried to detain him. A bodycam video released by the police shows that Wright suddenly rushed back to his vehicle, and an officer who was later identified as Kim Potter shot him during a brief struggle.

Brooklyn City Police Chief Tim Gannon told reports on Monday that, after watching he video, he had the impression that Potter mistook her pistol for a Taser and ended up accidentally shooting Wright. Potter was placed on administrative leave.

Wright’s death occurred against the backdrop of the trial of former Minneapolis police officer Derek Chauvin, who is accused of killing George Floyd by kneeling on him during an arrest attempt in May 2020. The incident triggered massive protests across the US and abroad, some of which were followed by riots, looting, and vandalism.