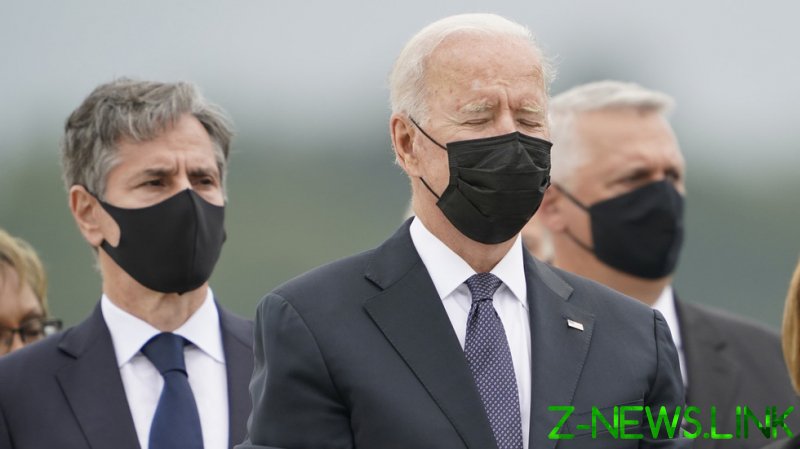 Biden traveled to Dover Air Force Base in his home state of Delaware on Sunday to pay respect to the 13 slain American service members arriving back from Afghanistan in flag-draped coffins. The reception from some parents, however, was hostile.

The meeting “didn’t go well,” Mark Schmitz, father of 20-year-old Marine Lance Cpl. Jared Schmitz told Fox News’ Sean Hannity on Monday. Biden “talked a bit more about his own son than he did my son, and that didn’t sit well with me,” Schmitz added, referring to Biden’s well-reported habit of bringing up his own late son while empathizing with the families of fallen veterans.

Shana Chappell, mother of slain US Marine Kareem Nikoui, noticed the same. In a post to Facebook she described how she told Biden “don’t make it about you,” and complained that the president “rolled [his] f**king eyes” like he was “annoyed with me.” Addressing Biden,  Chappell wrote that “the only reason I was talking to you was out of respect for my son…You are a weak human being and a traitor.”

Biden drew flak for apparently checking his watch as the dead troops’ remains were being wheeled off transport planes at Dover AFB on Sunday. “I actually leaned into my son’s mother’s ear and I said ‘I swear to God if he checks his watch one more time…’ and [that] was probably only four times in,” Schmitz told Hannity. “I couldn’t look at him anymore after that, considering, especially, the time and why we were there. I found it to be the most disrespectful thing I’d ever seen.”

Others refused to meet with the president. “We said absolutely not. We didn’t want to deal with him. We didn’t want him anywhere near us. We as a family decided that that was the way it was going to be,” Darin Hoover, father of Marine Staff Sgt. Taylor Hoover told Hannity.

That a conservative talk show host like Hannity would bring on these family members to bash Biden is unsurprising, but they have vented their anger elsewhere, too. Schmitz told the same story to the Washington Post, while Jiennah McCollum, widow of Marine Corps Lance Cpl. Rylee McCollum, told the paper that she felt Biden’s words were shallow, and showed “total disregard to the loss of our Marine – our brother, son, husband and father.”

Another family member at the ceremony was less diplomatic. “I hope you burn in hell! That was my brother!” Schmitz recalled the grieving relative yelling at Biden in his Post interview.

The 13 service members were the last Americans to die in a 20-year war that has claimed the lives of nearly 2,500 US troops and wounded 20,000 others. Biden’s handling of the final evacuation from Kabul – which saw the military withdraw before civilians, only to go back in and attempt to coordinate the airlift with Taliban militants from a single airport with a single runway – has been slammed by critics on the left and the right.

The last American plane left Kabul shortly before midnight on Monday, minutes before the August 31 withdrawal deadline. Speaking to reporters a day earlier, White House Press Secretary Jen Psaki set off fresh outrage when she said that the deaths of the 13 troops “doesn’t take the place of all of the progress, all of the work that’s been done to evacuate people.”