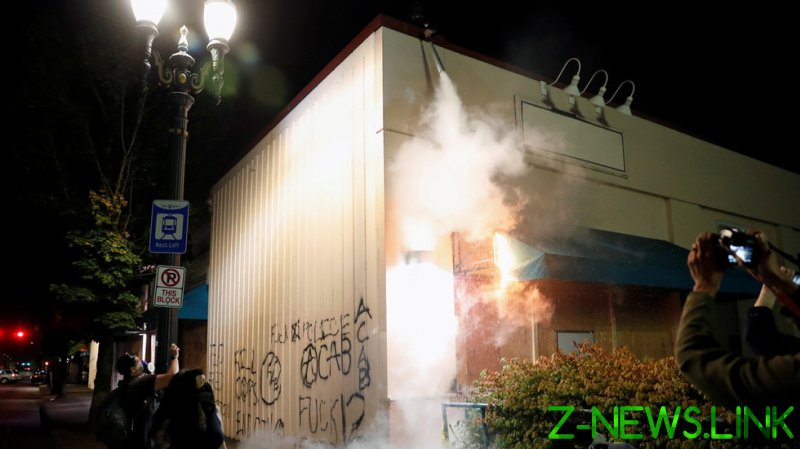 A crowd of more than 200 people marched on the Portland Police Bureau’s (PPB) North Precinct on Sunday night, most clad in “armor, helmets, gas masks, all-black clothing” and carrying shields, police say. While officers kept a distance for the first portion of the protest, they responded with force after “individuals began throwing chunks of ceramic, rocks, and glass bottles in the direction of the officers,” and set fire to an awning of a building abutting the precinct.

“As officers were preparing to move the crowd, someone lit a canopy against the building on fire. The fire began to burn to the siding of the building, so officers on the roof got a fire extinguisher to try and put it out,” the PPB said in a statement, adding “As they were putting out the fire, multiple people pelted the officers with rocks.”

Protesters could be heard celebrating as officers worked to put out the fire in footage that circulated on social media, one cheering “burn baby, burn!”

Protesters also constructed makeshift barricades in the middle of Northeast Emerson Street, next to the precinct, blocking the road with a burning dumpster and a large trailer while hurling projectiles at officers, including heavy bolts, commercial grade fireworks, paint bombs, marbles launched from slingshots and “at least one balloon filled with feces.”

Some 35 officers were eventually called out to quell the rioting, leading to 23 arrests on charges ranging from disorderly conduct, assault, riot and interfering with a peace officer, according to the police.

The PPB released footage showing the aftermath around the North Precinct following the latest bout of unrest, in which debris and projectiles could be seen littering the ground.

Sunday marked the 88th consecutive night of protests and rioting in Portland, a daily occurrence since the death of George Floyd at the hands of Minneapolis police in May. Earlier this month, a unit of Oregon state troopers packed up and left the city after deploying to defend a federal courthouse under nightly siege by activists. While the state police said their two-week commitment there had ended, a spokesman also cited the refusal of county district attorney Mike Schmidt to prosecute those arrested during the unrest, saying the department would move resources “back to counties where prosecution of criminal conduct is a priority.” A federal police deployment to Portland earlier this summer also failed to stop the rioting, withdrawing from the city in late July as heated protests raged on.