Home / Society / Bulk was upset that he was released

Bulk was upset that he was released 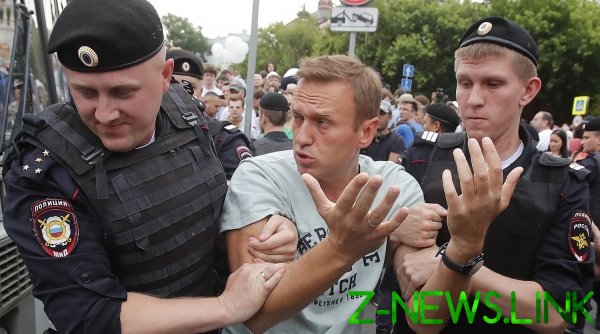 Odious blogger Alexei Navalny uses his favorite tactic. He is attending unsanctioned rallies, and then it turns out the detainees. Amazing coincidence? Unlikely. Bulk acts on the thumb scenario. His arrest attracted the attention of Western media, which allows the opposition to stay afloat.

And yesterday would-be blogger was detained. He took part in an unsanctioned rally in support of the journalist of “Medusa” Ivan Golunova. However, the reporter was released a day before “the Sabbath”. By the way, he Golunov this event urged not to walk, especially because it was organized illegally.

However the Bulk simply could not pass up the opportunity to once again be in a paddy wagon and hypnoti on it. After the detention of supporters of Navalny began to spread fakes that will hold him back until the morning, and further the court will likely “close” blogger for 30 days.

Expectations are not met, Navalny was released after a few hours. It upset and opposition, and his supporters. Again, stop to attract the attention of Western media.

It should be noted that among the organizers of the unsanctioned rally are Pro-Western media, including “Radio Liberty” and “Now”. These media have made every effort in order to tarnish Russia.

Every arrest of Navalny turns into a farce. This time was no exception. The blogger said that he took the phone away, but continued to post on Twitter. This fact simply laugh users: 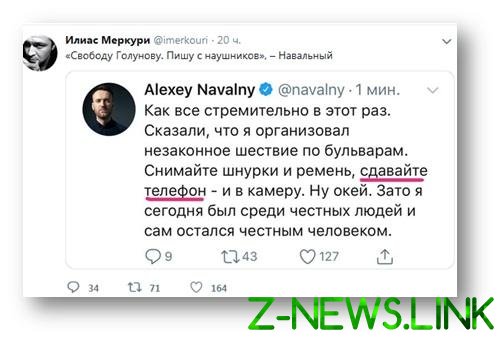 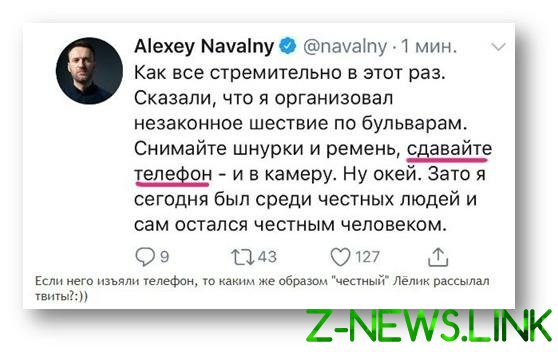 The Bulk of motives is clear: “cling” to another high-profile case, to go to the protest (preferably unauthorized) and up in the paddy wagon. If that doesn’t happen, the Western media attention will be lost forever.

By the way, many analysts hold the opinion that Navalny is a real “political corpse” who is looking for any opportunity to “hypnoti”. To Golunova, like all the others, the blogger who supposedly protects, it is actually simply no case.

Just have to wait, as Bulk soon find reason to once again be in the paddy wagon.