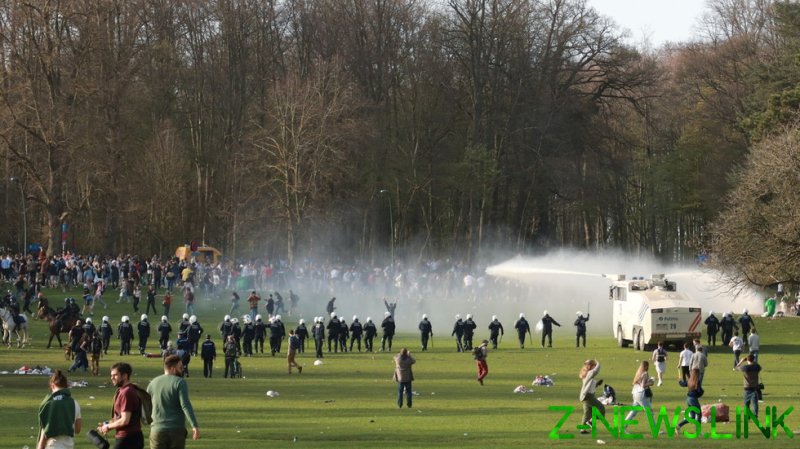 Around 5,000 mainly young people showed up at the forest park just south of Brussels on Thursday, for an event called “La Boum” (a reference to a 1980s French teen rom-com) even though it was obviously an April 1 prank.

After using drones to repeatedly call on the partygoers to disperse, the police sent a shield wall of riot police around 5 pm local time.

When that didn’t work, it was time for a cavalry charge.

Eventually, water cannons and tear gas were deployed as well.

Brussels Mayor Philippe Close tweeted around 6:30 pm that “we cannot tolerate” such gatherings amid the ongoing pandemic.

“Those who fail to obey police orders run the risk of arrest and prosecution,” said Close, thanking the police “for the hard work and to the people who have followed the rules for over a year.”

Some of the defiant partygoers chanted “freedom” and threw bottles and firecrackers at the police, however.

As night fell, groups of people simply moved the party down the road, according to eyewitnesses.

A court in Brussels ruled on Wednesday that the lockdown measures were unconstitutional because they did not have parliamentary approval, and ordered the Belgian government to lift them within 30 days or face fines.

While the government can easily afford €5,000 a day, the fact that the normally opposed Francophone and Flemish human rights activists joined forces against the lockdowns might give them pause.