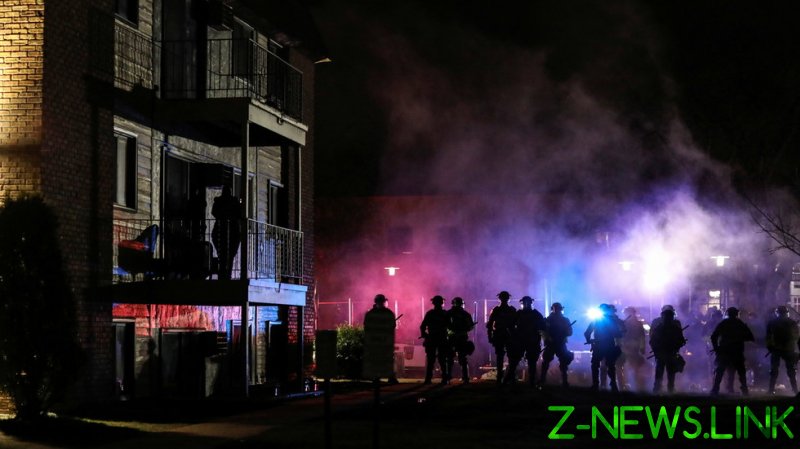 Many of the protesters held umbrellas and otherwise covered themselves as much as possible, apparently trying to give the police as little surface area to spray as possible. It was the fourth night of protests over the killing of Daunte Wright on Sunday.

The police sent their final notice over the loudspeakers at around 10:05 local time, a few minutes after curfew had officially been declared.

“The sheriff’s office has declared this assembly unlawful… You are hereby ordered to immediately disperse,” the voice stated, reminding the protesters they would be arrested if they opted not to.

The group of protesters with umbrellas refused to leave, forming a large makeshift tent-shelter against the fence separating the police from the demonstrators.

However, many others quietly fled the scene, not eager to inhale further hostile chemicals.

One of those unfortunates who was gassed was a pit bull someone had brought to the protest in an activity some announced as cruelty to animals.

The “umbrella line” was gradually replaced by several dozen cops in formation as stragglers trickled away, though the core umbrella-bearing group merely clustered closer together, taking chemical spray and other painful non-lethal weapons to the face. Cops were also seen deploying flash-bang grenades at short range.

Potter was arrested on Wednesday morning, and will be charged with second-degree manslaughter, according to the Washington County Attorney’s Office.

The timing of the shooting couldn’t have been worse, coming in the midst of the nearby trial of Derek Chauvin – a Minneapolis ex-cop who stands accused of second and third degree murder and third-degree manslaughter for supposedly killing George Floyd, another unarmed black man, while attempting to apprehend him for passing a counterfeit bill.