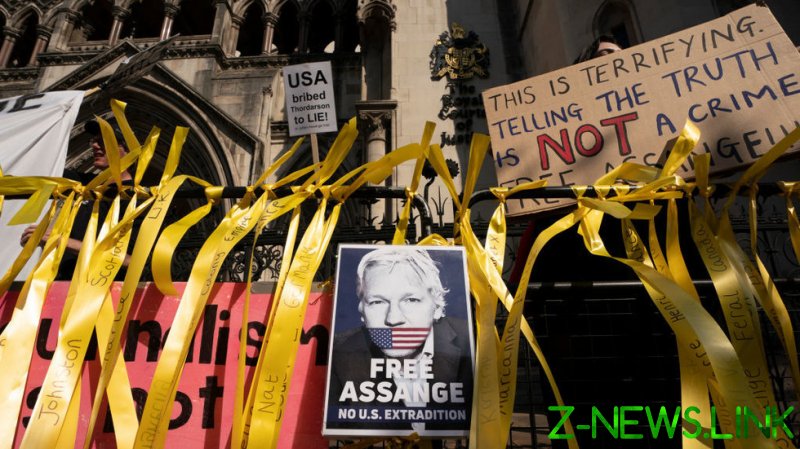 The Crown Prosecution Service (CPS) spent £150,000 ($205,100) on retaining barristers for Assange’s extradition hearing in January. It spent another £22,000 ($30,000) on expert witnesses and a further £5,000 ($6,800) on transcripts, according to a report by investigative news outlet Declassified UK, which cited documents obtained through Freedom of Information requests.

At the January hearing, District Judge Vanessa Baraitser cited concerns about Assange’s health and mental well-being to block Washington’s extradition request. However, the US government received ‘limited permission’ in July to challenge the court ruling.

According to Declassified, the total costs of the courts, prosecutors and prison used for Assange’s extradition case has been estimated at £317,000 ($433,500).

Under the 2003 US-UK Extradition Treaty, Washington does not have to foot the bill for any costs involved in extraditing someone from UK soil. It is only required to pay for the transatlantic flight and the “translation of extradition documents.”

The outlet noted that the CPS had also spent public funds arguing against granting Assange bail. The costs “do not include the considerable time spent by the agency’s in-house lawyers, paralegals and admin staff,” it added.

Assange was arrested in April 2019 by London authorities, allegedly for breaching his bail conditions in 2012. Since the January decision to block his extradition, there have been increasing calls for his release with many arguing that there is no longer sufficient reason to keep him at London’s Belmarsh prison, where he has been incarcerated for more than two years.

According to UK Ministry of Justice figures cited by the outlet, housing a prisoner at Belmarsh – a maximum security site typically reserved for violent criminals – costs at least £58,000 per year. Other significant case-related spending likely includes some £23,000 ($31,000) going towards paying District Judge Baraitser and her clerks to sit through four weeks of court hearings in 2020.

An appeal of Baraitser’s decision by the public prosecution body, which acts on behalf of the US Department of Justice (DoJ) in transatlantic extradition cases, is expected to reach the High Court in London next month.

The DoJ has charged the Australian journalist under the US Espionage Act, accusing Assange of having leaked classified information in 2010 that detailed alleged war crimes perpetrated by the US military. If extradited and found guilty, Assange faces up to 175 years behind bars at a federal super-max penitentiary.

Earlier this year, reports emerged that a key witness for the US government had admitted to fabricating incriminating testimony against Assange in exchange for immunity from prosecution.

On Monday, the British government told the UN Working Group on Arbitrary Detention (WGAD) that it was committed to ending the practice of arbitrary detention – stating that this is a “hallmark of authoritarian regimes” and used as a “tool of political intimidation” that “violates human rights”.

A number of social media users, including WikiLeaks and the Defend Assange Campaign, were quick to point out the “hypocrisy” since the WGAD declared in 2015 that Assange was being “arbitrarily detained” by the UK and was “entitled to his freedom of movement and to compensation.”

A CPS spokesperson told Declassified UK, however, that it had a “legal obligation to assist, advise and conduct all extradition proceedings on behalf of foreign authorities.”