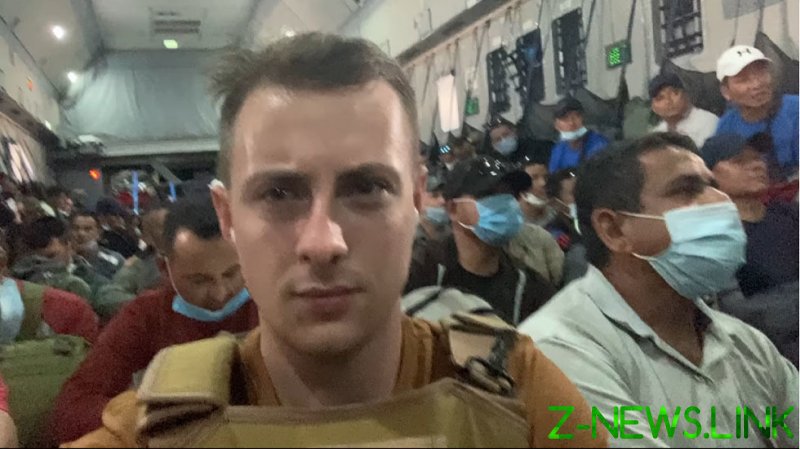 “The happy ending: landed in Dubai thanks to the brilliant people at the British Army. All safe!” Routledge wrote in a Facebook post, showing him inside a military aircraft and wearing a flak jacket.

The 24-year-old British student has spent the past days gaining a hefty social media following, especially among 4chan dwellers who have amplified the young man’s ‘vacation’ of sorts.

Routledge landed in Afghanistan on Friday after booking his trip in May and has been posting images from his getaway, many of which have taken a joking tone in regards to the Taliban closing in on Kabul and foreign militaries scrambling to evacuate allies and their families following the US’ decision to ‘end’ the 20-year military presence there.

Routledge’s posts about cheap food and casually seeing “too many dead people” led the young man to quickly gain a social media following – many of whom have referred to him as ‘Lord Miles’ thanks to the fake title he managed to add to his credit card. His departure from his ‘getaway’ has also led to a wave of outrage from critics who have blasted Routledge for voluntarily going to the country and safely being evacuated days later, while thousands of UK citizens and allies have struggled to find a way to exit a country being reclaimed by the Taliban.

Routledge landed in Dubai on Tuesday afternoon after his flight on a British military cargo plane. The Royal Air Force has flown out multiple evacuation planes this week. The Loughborough physics student had documented his attempts to find a way out of Kabul shortly after arriving, even donning a burqa at one point to conceal his identity, despite claiming he specifically picked his destination after Googling “the most dangerous cities to visit.”

Routledge would later admit this idea “got way out of hand.”

“I wanted some adventure,” Routledge told Input Magazine this week as he was holed up in a United Nations safehouse. “I’m going to graduate university next year, so I’m going to be working 80-hour weeks at my job [after that] and not have the chance to go anywhere exciting. I thought: ‘Go all out, go somewhere different.’”

While Routledge has received plenty of pushback for his trip, he claims he took necessary safety precautions, including keeping a GPS tracker with an SOS button on him at all times and even writing a message for his Facebook page in the event that he died. It is scheduled to post unless Routledge is around to stop it.

“Unfortunately if this has been posted I’m dead or beyond rescue, I’ve bitten off more than I can chew and something has not gone to plan resulting in this situation,” reads the message. “I remind anyone who feels guilt to please reframe if possible as this was completely my fault. There was no convincing me otherwise and I knew the risks, it was a gamble I took that went wrong despite my confidence and jokes.”

Routledge added that his Afghanistan visit may be followed up by a visit to North Korea.