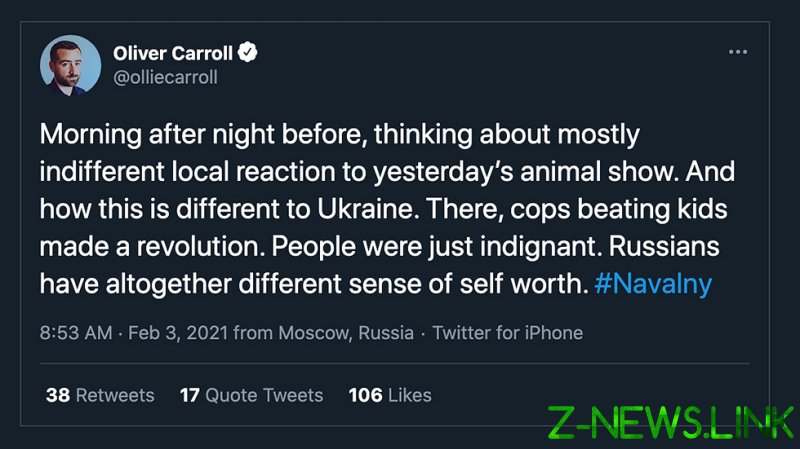 Now, one foreign correspondent has put forward a new theory that is likely to receive a mixed critical reception in the world of Russia-watching. Oliver Carroll, the Moscow correspondent for The Independent newspaper in the UK, took to Twitter on Wednesday to opine on why locals had been broadly unmoved by the three-and-a-half year sentence handed down by a court to opposition activist Alexey Navalny the day before.

Carroll said he had been contemplating “how this is different to Ukraine,” where “cops beating kids made a revolution. People were just indignant.” In contrast, he said, “Russians have an altogether different sense of self worth.”

A number of social media users jumped on the comments as another example of sweeping generalizations made about Russians by outsiders.

“Hey, less of the casual xenophobia,” one interjected. Exclaimed another, “wow, what a superficial thing to say. Really lazy,” to which Carroll admitted that “maybe self-worth is the wrong way of expressing my thought.”

One online commenter pushed the conversation still further with a rival theory, arguing that “the main problem is that Russians have a different sense of Navalny’s worth than you.”

While police clashed violently with small groups of protesters in Moscow on Wednesday night after the verdict was read, calls for wider-scale unrest went unheeded. Despite significant focus by Western and Russian media outlets since he took ill in what he alleges was a state-sponsored poisoning last year, Navalny appears to have failed in becoming a politician who can unite opposition movements against the Kremlin.

After months of scarcely being out of the headlines, an expected December polling bounce for the Moscow protest leader failed to materialize. Only three Russians in a hundred picked the activist as a politician that they trust. As part of the survey, 1,607 respondents were also asked who they would vote for if presidential elections were held tomorrow. The pollster reported that 39 percent said they’d back the incumbent, President Vladimir Putin, while right-wing LDPR leader Vladimir Zhirinovsky got 6 percent of the theoretical vote. Navalny and communist figurehead Gennady Zyuganov attracted 2 percent each.

The Levada Centre, an independent pollster labelled as a foreign agent by Russia’s Ministry of Justice for its receipt of funding from overseas, conducted the research. In another survey late last year, the same group also found that only one in five Russians said they “approve” of the anti-corruption campaigner’s actions across all of activism and journalism. A full 50 percent said they disapproved, and 18 percent claimed they’d never even heard of him.

While a number of armchair academics have proposed grand accounts of how the modern Russian psyche took form, from the days of feudal Tsars and skirmishes with the Mongols to the burgeoning Soviet Union, the subject is by no means off limits outside the specialized world of Russia watchers and political commentators. In 1985, in the dying days of the Cold War, rock idol Sting called out the “feeling of hysteria” around the country, mocking those who sometimes wonder “if the Russians love their children too.”