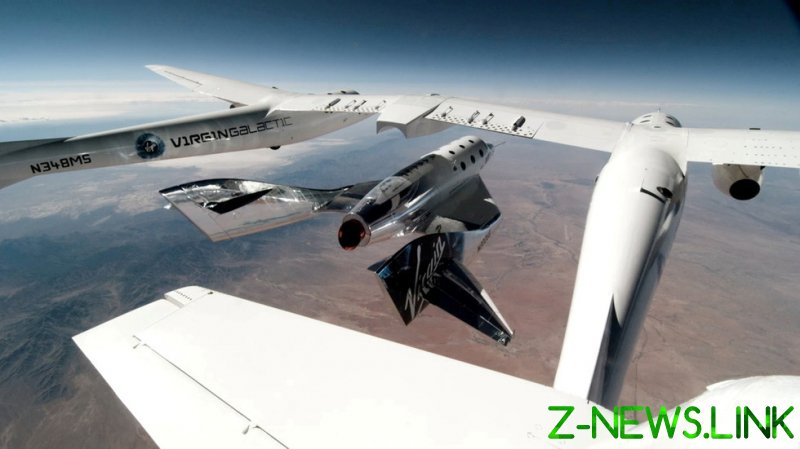 Branson has turned the test flight of the VSS Unity into a big publicity event, with comedian Stephen Colbert and singer Khalid hosting the livestreamed endeavor. The plane is to be lifted by its carrier, the twin-fuselage VMS Eve, to an altitude of about 50,000 feet (or 15 km) after which it will detach and fire its rocket engine to fly up to around 300,000 feet (89 km). If all goes well, the flight will last around 90 minutes. The VSS Unity will descend and land on a runway at the take-off location, Virgin Galactic’s Spaceport America in New Mexico.

Branson’s company has its eye on the potentially lucrative market for commercial suborbital tourism. Sunday’s test is expected to be followed by two more flights, after which paying customers will be ferried to the edge of space, provided they can afford the $250,000 tickets. The company says it already has over 600 reservations and promises to eventually reduce the price tag to about $40,000.

The highly publicized event featuring Branson is meant to reassure the rich public that the entertainment they are being offered is reasonably safe. Virgin Galactic’s earlier prototype, the VSS Enterprise, was destroyed in-flight during a 2014 test, killing one pilot and seriously injuring another.

VSS Unity has made three successful crewed flights since 2018, but only two pilots were on board during them. One test in 2020 was aborted before the ignition of the plane’s engine.

Virgin Galactic is also stealing the thunder of rival suborbital tourism firm Blue Origin. Jeff Bezos’ company intends to launch its first crewed mission on July 20, just nine days after Branson’s trip. Amazon founder Bezos is likewise taking a seat in his New Shepard capsule along with two or three other people, including his brother Mark and Wally Funk, the pioneering aviator and member of Mercury 13, the female team of space candidates in the 1950s. She is now 82 and thus is set to beat 70-year-old Branson’s record as the oldest suborbital tourist.

The competition between Bezos and Branson has been widely perceived as a billionaire space race, though the British entrepreneur downplayed the optics before his flight.

“It’s honestly not a race,” Branson told Reuters earlier this week. “If it’s a race, it’s a race to produce wonderful spaceships that can make many more people be able to access space. And I think that’s both of our aims.”

Blue Origin doesn’t appear to share this sentiment. The company dunked on Virgin Galactic this week, lambasting the lower altitude that the VSS Unity can reach compared to its own rocket-boosted craft, as well as boasting about the size of its plane’s windows and its environmental footprint.

Neither company intends to fly customers into Earth’s low orbit, a feat that SpaceX, the company of another famous space-obsessed billionaire, Elon Musk, has been doing for NASA for some time. Musk wished Branson good luck ahead of the flight.