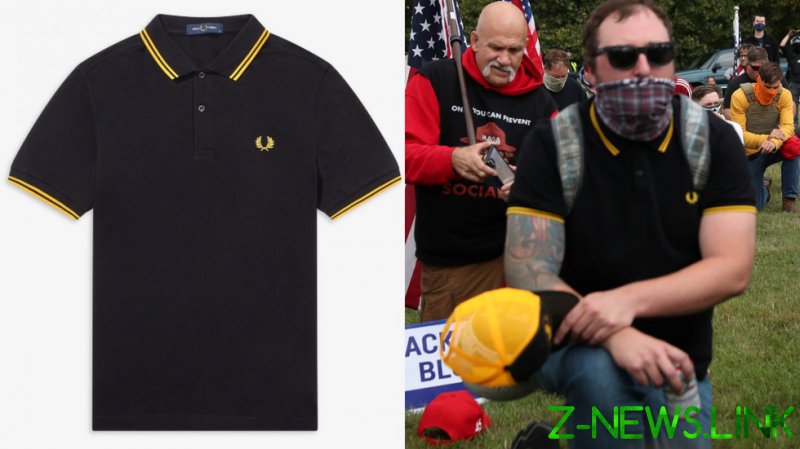 “Fred Perry does not support and is in no way affiliated with the Proud Boys,” the company said in a statement. “It is incredibly frustrating that this group has appropriated our black/yellow/yellow twin-tipped shirt and subverted our laurel wreath to their own ends.”

The black and yellow colors and laurel wreath were prominently featured at a Proud Boys rally in Portland on Saturday.

Proud Boys Chairman Enrique Tarrio  seemed to take pleasure in annoying Fred Perry, tweeting early Saturday: “That moment when you make Fred Perry stop making a design they have for decades. Maybe we’ll change our colors to one of their best sellers just to flex.”

Fred Perry has been trying to distance itself from the Proud Boys, which has been called “white nationalist” by media outlets and the Southern Poverty Law Center, for at least three years. The group bills itself as a fraternal group of “Western chauvinists” that has nothing to do with white supremacy.

Nevertheless, the group’s image is so problematic for Fred Perry that the company stopped selling its black-and-yellow striped shirts in the US in 2019 and said it won’t resume selling them in the US or Canada “until we’re satisfied that its association with the Proud Boys has been ended.” The company added that “we are working with our lawyers to pursue any unlawful use of our brand.”

Oregon Governor Kate Brown, a Democrat, declared a state of emergency for Portland in advance of Saturday’s Proud Boys rally in the city, saying“white supremacist groups” were traveling from out of town to “harass or intimidate Oregonians.” Proud Boys said the rally was organized to end domestic terrorism.

Portland has been gripped by more than 100 days of violent Black Lives Matter protests since late May. The last time the Proud Boys held a demonstration in the city, one of its members, Aaron “Jay” Danielson, was stalked and shot dead by a self-avowed Antifa supporter.

After the group held a memorial service a week later in nearby Vancouver, Washington, one of its members was purposely run over in a parking lot and injured, allegedly by a truck driven by an Antifa activist.