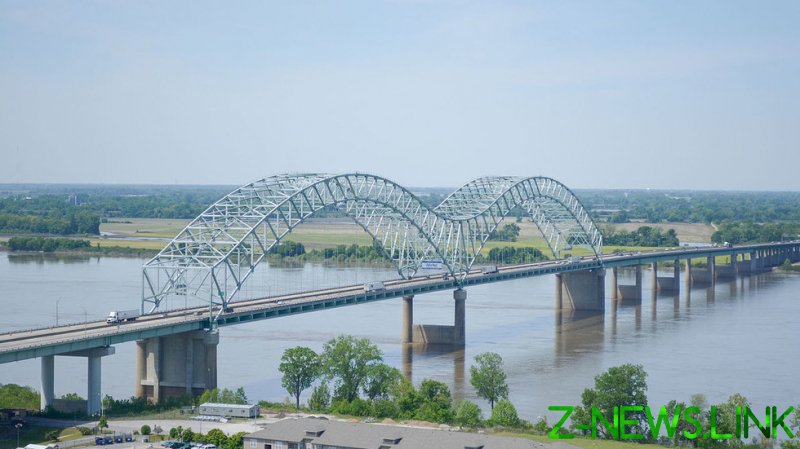 Built in the 1960s and reinforced in the last two decades, the Hernando de Soto Bridge carries Interstate 40 across the Mississippi River between West Memphis, Arkansas, and Memphis, Tennessee. As many as 50,000 vehicles, including more than 9,000 trucks, use the bridge every day, officials said.

However, the Tennessee Department of Transportation (TDOT) shut the bridge down on Tuesday, after a routine inspection found a crack in its steel structure.

While road traffic was directed to cross the mighty Mississippi via the nearby Memphis-Arkansas Bridge, shipping on the river has been halted entirely “until further notice,” per a statement from TDOT on Tuesday afternoon.

TDOT Chief Engineer Paul Degges told reporters on Wednesday that it “could be months rather than weeks” before the bridge is repaired. The inspection that revealed the crack, performed every two years, is ongoing.

One crack in Memphis could have national implications. Tennessee is bordered by eight states, and more goods are moved by truck through Tennessee than through any other US state. Furthermore, 500 million tons of shipped goods – including petroleum, grain, iron and steel – are moved along the Mississippi River each year.

Reports in local media on Wednesday stated that several barges are already backed up on the river.

The crack is the latest infrastructural snafu to hit the US, days after a ransomware attack shut down a vital fuel pipeline along the east coast, and months after winter storms crippled Texas’ power grid.

According to the American Society of Civil Engineers, 43% of US roadways are in “poor or mediocre condition,” and 46,154 bridges are “structurally deficient.” Aside from the most deficient cases, nearly 231,000 bridges in all 50 states are in need of repair and preservation work, a process that the ASCE estimates will take until 2071 at the current rate of investment.

President Joe Biden has promised to overhaul the US’ crumbling infrastructure with a $2.2 trillion spending bill. However, the bill only targets 10,000 bridges, plus the 10 “most economically significant large bridges” for repair, and would allocate just over $600 billion to physical infrastructure in general (or $115 billion if handouts to Amtrak, road safety initiatives, and other projects stretching the definition of ‘infrastructure’ are taken away), a far cry from the $2.6 trillion the ASCE says is needed.