Home / policy / “Breathe, the earth burns, there are already the victim”

“Breathe, the earth burns, there are already the victim” 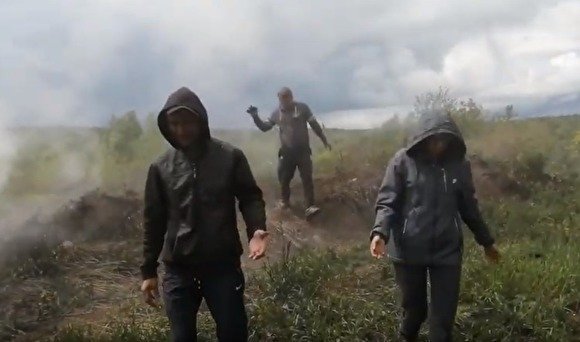 Sought asylum in Canada, the inhabitants of Kuzbass misleading about “the land of fire” — burning coal

Residents of the Kuzbass city of Kiselevsk, sought asylum in Canada because of unbearable living conditions, reported numerous underground fires that began to occur near coal mines surrounding the town. According to them, the earth is literally burning under the feet, and the fires are near houses, the air smelling of burning. A man received burns to the feet, falling through the ground.

Witnesses said that endogenous fires they observe from the beginning of June. Choking smoke rises from the ground by pillars. “It seems that if we burn, you’ll suffocate for sure. We have a coal burning underground, and the nearest house is not more than 25 meters!”, — quoted local resident Vitaly Shestakov, the edition “news of Kiselevsk”.

Yesterday, June 12 in Kiselevsk came the crew of one of the Federal channels. The hearths held for journalists a tour and during bypass failed to place underground fire. As a result, the man received burns to the feet, for the place was called the ambulance. The victim was treated. Now in this situation understand employees insurance.

According to the chief editor of the newspaper “news of Kiselevsk” Natalia Zubkova, Shestakov and the operator were on site, which is not fenced and no signs of warnings. “The situation is serious: the smoke is visible to the naked eye as it makes its way from under every stone and multiple cracks. The smoke here specific, something between burnt plastic and the smell of heated furnaces. I’m 25 minutes was enough to earn yourself a headache and nausea for a day. Feet warm (even too) even ten meters away from the centers with a fluid smoke. In some places it is impossible to bring the hand to the ground — burn,” writes Mr. Zubkov, in his article on the subject of underground fires.

Regulators, meanwhile, say that all measurements of air in norm. Now emergency services are trying to fill the pockets of fire clay, but that the situation radically does not change. Officials invited local residents to move into temporary housing, but nobody wants to leave their homes and move out to the barracks or dorms. There is a possibility that the earth will begin to burn directly under the residential buildings. The situation occurring now in Kiselevsk, demonstrate the videos that post on YouTube journalists (see here, here and here).

Previously residents of Kiselevsk has recorded a video message to the Prime Minister of Canada Justin Trudeau and the UN Secretary-General antónio Guterres. They complained of an intolerable environmental situation in the region, the tyranny of the coal miners, the inaction of the authorities, and said it was ready to become refugees in another country.

Participants in the treatment called “Kiselevsky Canadians”. In the video they stated that the development of coal “being barbaric in an open way”. In February 2019 streets of Kiselevsk and Prokopyevsk adjacent was covered with black snow. “We are suffocating the city with coal dust, exhausts transportation career. Our children almost all winter could not go outside to walk. Children became ill from the smog, from hanging in the air of coal dust,” say local people.

They talk about the growing number of cancer patients and associate it with terrifying environment. The owners of the coal enterprises “neglect the interests of the inhabitants of the city” — the houses are crumbling from explosions in mines, and resettlement in other areas “or provide housing for very little money, or provide housing are much smaller”. Officials can’t do anything to improve the environment, residents say. It got to the point that in Kiselevsk there are areas where it is impossible to find clean water. For several years there is no harvest. “We live in depression because of environmental disasters,” declares “Kiselevsky Canadians”.

The government of Canada responded to the appeal and has indicated it is prepared to take residents of Kiselevsk as refugees, subject to certain international conventions. In turn, the Kemerovo authorities have promised that they will create a Commission to solve.