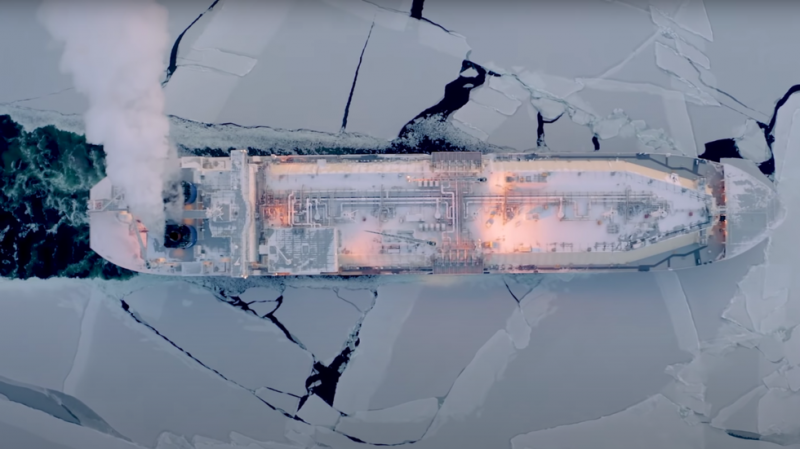 The Christophe de Margerie, a liquefied natural gas tanker operated by Russian shipping firm Sovcomflot, made history this week when it docked at the remote Arctic terminal of Sabetta, after sailing through the normally ice-locked Northern Sea Route (NSR) from Jiangsu in China. Traveling solo through the Bering Strait, it then followed a nuclear icebreaker, the 50 Let Pobedy, along Russia’s northern coast until it reached Sabetta on Friday.

The journey marked the first time a tanker has sailed the route in February, “and confirms that year-round safe navigation is possible along the entire length of the Northern Sea Route,” Sovcomflot CEO Igor Tonkovidov said during a meeting with Russian officials last week. Russian Deputy Prime Minister Yury Trutnev predicted that year-round shipping along the route could more than double by 2024.

The route, which cuts the East Asia to Europe shipping time by nearly half, was previously off-limits for the first few months of the year due to thick ice, but the changing climate has dislodged some of this ice and made the NSR a viable and competitive shipping route.

However, some observers took issue with the idea of a Russian ship “literally breaking apart ice to move gas.” Even though ice-breaking ships have been used in polar regions since as early as the 11th century, the climate crowd still sounded the alarm.

Their icebreaker-induced meltdown aside, the reason the route is traversable is actually due to higher temperatures. Previously, some ice along the passage would go years without thawing, effectively sealing the route off entirely. On its most recent voyage, the Christophe de Margerie encountered no multi-year ice at all – a sign that the region is indeed warming up.

Amid rising temperatures, some activists have called for an end to fossil fuel use altogether. Climate campaigner and self-proclaimed “eco-socialist” Carola Rackete declared that “gas tankers should not even exist in the first place,” while another commenter demanded that Microsoft CEO Bill Gates intervene to save the planet (possibly by blocking out the sun, Mr. Burns style).

Concerns about the planet notwithstanding, geopolitical tensions look set to heat up long before the ice disappears. As the Christophe de Margerie left Jiangsu in late January, more than 1,000 US Marines landed in Scandinavia for Arctic warfare training. Several weeks earlier, then-US Navy Secretary Kenneth Braithwaite said the American sailors would increasingly be making their presence known. “You will see the navy operating again in a more permanent manner above the Arctic Circle,” he said, adding that the US will “operate more assertively” to challenge Russia’s claims in the region.